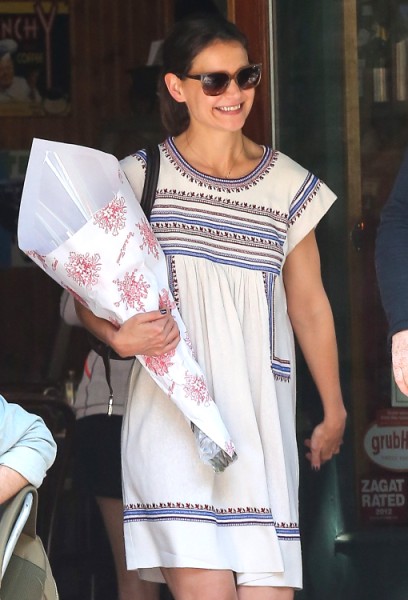 It’s been a year since Katie Holmes stole her freedom back seemingly with only a disposable phone, tweezers and an unshakable will but it feels like so much longer. I can’t even remember a time when she was shackled to Tom Cruise. This year of reinvention has been crazy and full. We’ve had Broadway plays and tabloid law suits, rumored new significant others and floundering fashion lines. The former Mrs. Cruise wasted no time getting back into the swing of her NYC life and now she’s ready to rejoice in all the courage, steadfastness and remarkable secrecy that led to her great escape. It’s a divorce party y’all!

According to The Sun, Kate Homes’ celebrating at the Jane Hotel in Manhattan to thank her friends for their support this year. A source said it will be “enjoyable and emotional.”

Oh why not? If anyone has something to celebrate it’s Katie Holmes. True, things haven’t quite worked out like she probably hoped. Her career still hasn’t quite picked up and the fictitious Suri Cruise fashion line is more excitable than hers but it’s got to be better than the alternative. She did manage to bring Scientology to its knees and is currently filming a Spike Lee movie. All in all, not bad for 12 measly months.

AND there’s Luke Kirby. Will he be at the party? Being as chummy as they’ve been lately I’d be surprised if he didn’t get an invite. I haven’t seen any new friendly pics of them lately but Katie could just be getting more guarded in the romance. That or Tom’s minions finally managed to scare him off. Katie Holmes’ divorce party might be a slap in Tommy’s face but you’ve got to wonder… will she ever truly be free of him? He’s probably always lurking….