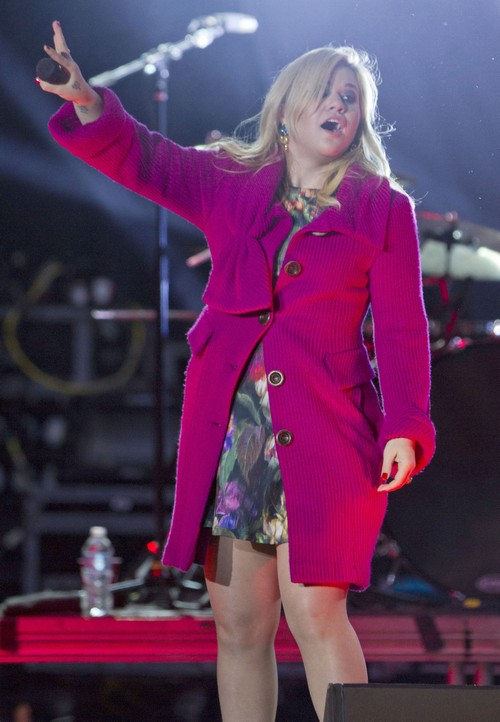 Kelly Clarkson and Brandon Blackstock are married, with a kid on the way. But with all these rumors about Brandon’s supposedly cheating ways, are they headed into trouble?

The Dirty posted an ‘exclusive’ earlier today, supposedly from a woman who hooked up with Brandon while he was engaged to Kelly. The long letter written from this woman gave all sorts of details about their supposed hook up, and she also claims she’s pregnant. The Dirty also claims to have ‘verified’ this report, although I’m not exactly sure what that means.

However, Kelly’s not taking these rumors lightly. In the comments section for the story on The Dirty, a woman posted a comment under Kelly Clarkson’s name, and it seems it may have actually been Kelly Clarkson. The comment said, “This is absolutely absurd. The woman who posted this fictitious rumor about my husband use [sic] to be my personal assistant until I terminated her for trying to steal from me. She even tried to impersonate me by soliciting funds using my name and created a ficticious website. This woman is just out for revenge.”

Interestingly enough, according to Radar, Kelly’s rep didn’t deny that it was her who wrote the comments, simply saying that they don’t comment on their clients’ personal lives. Um, isn’t that the JOB of a rep? To confirm or deny rumors that may or may not be true, and damaging to their clients?

What do you guys think? Did Kelly write that comment? The fact she felt that she needed to write something isn’t a very good sign – people secure in their relationships don’t often do that. Are we saying the deterioration of  trust between Kelly and Brandon? She’s also pregnant, which makes it even more difficult for her to process all these rumors and speculation.