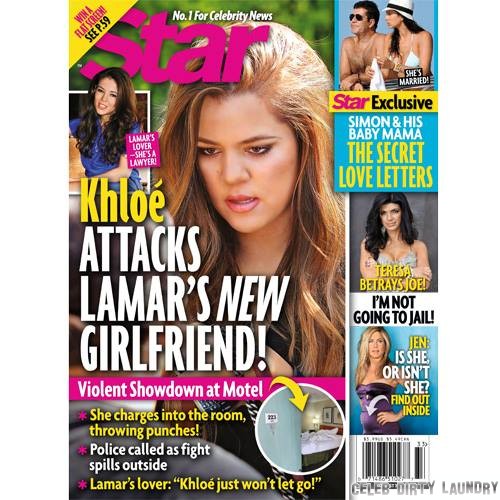 I guess every women has her breaking point. But did Khloe Kardashian really have to go and trash the newest mistress, Polina Polonsky’s, hotel room? Cops broke up the fight before any serious damage occurred. F.Y.I – that’s not classy. Don’t get me wrong its great entertainment but she’s a Kardashian. I’m sure she’ll have plenty of potential husbands willing to be faithful. It’s only Lamar Odom who happens to be wealthy enough he he can stand to let go of her money bags.  He probably even detests Khloe’s wealth. Because there must be some reason that he cheats.

Men cheat not necessarily for the sex but they do it to establish power. Look at every rich man and politician. Lots of them are cheaters yet they have such beautiful wives. It’s not as if some of these women they cheated with are even more beautiful. Half the time these sluts are dogs but these guys still sleep with them. Now look at Lamar’s mistresses. Jennifer Richardson is a tattooed prostitute, more handsome than pretty. While the new one, Polina isn’t all that attractive either but that might have to do with her looking like Jennifer.

With Jennifer, Lamar reportedly tried to have a baby with her. We knew that  must have hurt Khloe. Although the fact that there wasn’t a kid might have allowed her to write off the shame as a “Jennifer was sex only.” Polina is a whole other story. She’s actually smart. Seriously, she’s a lawyer. That’s right, she was already on the bottom totem pole (lawyers are slime) but her lie detector test made her sink even lower. She had taken a lie detector to prove her 6 week fling with Lamar actually happened. She was smart enough to know that would boost the sale of her story. Otherwise Jennifer would have gotten all the recognition.

Now this one went too far. Its one thing to claim your sleeping with someone’s husband and its quite another to go and prove it. I don’t blame Khloe for snapping. Any woman would have hunt this chick down and fought her. Extensions flying everywhere, make-up smudged, and totally dignity lost but it would have been worth it.

Only one question remains now. Is Lamar still going to try and deny it?