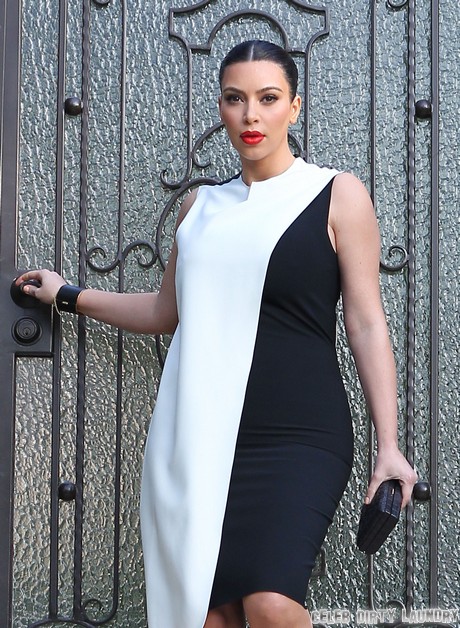 Kim Kardashian filed for divorce after an infamous 72 days of marriage, and started publicly dating Kanye West less than six months later. The couple announced their first pregnancy just after Christmas, leading many to speculate about Kim’s divorce proceedings from Kris Humphries. The NBA player insists that he was a victim of Kim, who staged it all for publicity, and new evidence suggests he could be right! We all know that Kim is a shameless whore when it comes to money and fame, so the idea that she just married for the lavish endorsements is pretty easy to swallow! Will new evidence against Kim speed up Kris’ win in court?

The pregnant reality star insists her wedding was not a sham, which could “save the estimated $22 million worth of freebies she got from wedding sponsors,” reports Star Magazine, print edition March 4, 2013. A source explained that “getting her marriage annulled is tantamount to admitting it was a sham, and she’s fully aware that it could get her sued by all the brands that donated to help make her wedding happen.” Basically, Kim’s hands are tied. Sure, in a perfect world she wouldn’t be married and pregnant with another man’s baby. And yes, Kris may be dragging it on for revenge and pride, but really . . . it’s time Kim learned the sun doesn’t revolve around her person! And what we call a cold reality check, she calls bullying!

Kim is trying to use her “unplanned” pregnancy to bully the court into rushing her divorce through, and claims that the “health and well-being of my unborn child” depend on it. But an insider says she got pregnant for just this reason, and there was nothing accidental about it! She and Kanye had “sex every second of the day. Kanye definitely thought it was weird, but he didn’t think too much into it.” The couple have even “visited Beverly Hills fertility specialist Dr. Mark Surrey multiple times” for IVF treatments.

Kim also claims that her relationship with Kanye happened after she and Kris separated, but an insider says it’s all a lie! “Kim actually had sex with Kanye while she was still with Kris . . . She kept her relationship with Kanye a secret until March (2012), but all her friends say she was cheating on Kris with him.” Kim has never come off as trustworthy, but neither has Kris! He seems a bit desperate to come off as the victim. Fortunately, he’ll be spilling all of her dirty secrets in court testimonies, which won’t begin until May! Do you think Kim lied about her marriage? Is Kris right to drag it out so long?