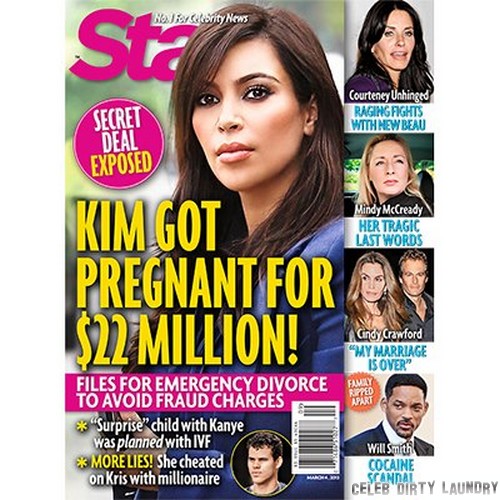 Reality star Kim Kardashian is featured on the front cover of the latest issue of Star magazine. Unsurprisingly, the magazine is making the claim that Kim got pregnant for a whopping $22 million! This is not shocking news at all, is it?

Kim is a huge fan of making that almighty dollar, so it really wouldn’t surprise me one iota to learn that she was paid $22 million or $22 to occupy her uterus with Kanye West’s baby. She put out a sex tape to gain fame, remember? Let’s not put anything past this twatwaffle, okay?

The magazine reports that there was some kind of top secret deal and that Kim had to file for an emergency divorce from Kris Humphries to avoid fraud charges. So perhaps he’ll get that annulment after all?

As we already know, Kim has claimed that this pregnancy was unplanned, but the tabloid reports that it was actually planned and that Kim used IVF in order to get pregnant. Even worse, the magazine unveils Kim’s cheating on Kris while they were married with a millionaire.

Who could she have been cheating on Kris with? Does anyone want to take a guess at that one? We’re kind of curious there, aren’t you?