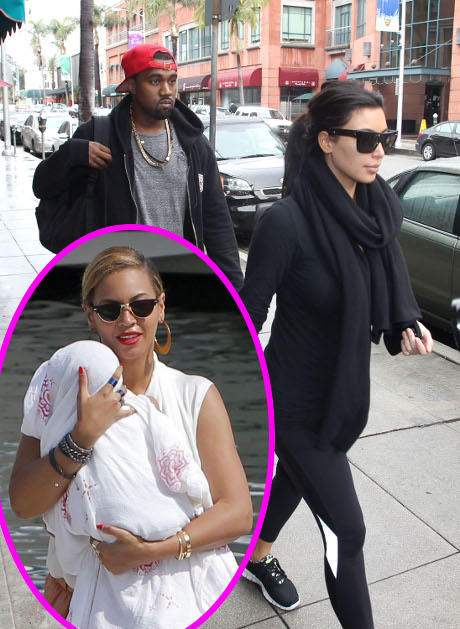 We’ve come across an interesting video on the web and it features Kim Kardashian conversing with a rather distraught Beyonce, and Kim’s only goal is to get Beyonce to be her BFF for life. But, The Beyonce ain’t having none of that, even if Kim Kardashian is linked to their lives by her baby’s daddy, Kanye West. Speaking of Kanye West, he gave away that pregnancy secret in true Kanye West style. If only Kanye West knew all of Hollywood’s deepest, darkest secrets. Just think how easy it would be to get the dirt and major scoopage?

The video, posted on YouTube, supposedly features a call between the reality TV star and singer. It’s quite hilarious, really. Kim opens the conversation telling Beyonce that Kanye gave her the phone number and told her to ring her up so they could get to know one another — because they’ll undoubtedly be spending a lot of time together. For those who don’t know, Kanye West is very close to Jay-Z and Beyonce. But it’s no secret that Beyonce, diva to the max, isn’t head-over-heels for a friendship with Kim Kardashian. They don’t really seem like they’d create a compatible friendship. In the phone conversation Beyonce sidesteps around Kim’s invitation to do lunch, and uses her daughter, Blue Ivy, as an excuse.

“Well, it would be fine if Blue comes,” says Kim. “Blue Ivy?!” interjects Beyonce. “Strangers that don’t know her gotta call her by her full name, and I don’t know whatcha trying to do, but I’m not gonna take her ’round bunch a paparazzi. That just don’t sit well with me.”

“I’m a married woman for years and I have a healthy baby . . . . You should try it,” Beyonce says, hanging up the phone on Kimmy.

It’s pretty clear that this video isn’t really Kim Kardashian and Beyonce on the phone talking. But it’s hilarious nonetheless, because you know it’s the truth. Kim Kardashian wants nothing more than to have real Hollywood stars as friends, but sometimes she falls a bit short when it comes to this endeavor because, well, she’s a bit annoying.

What do you think of this video? Do you get a kick out of it? We can’t wait to see what Kanye West and Kim Kardashian’s baby looks like! I bet it will pop out rapping, have a fashion line of his/her very own, and be the star of a baby-based reality TV show. Expect more news in the coming days and months about the following: Kim Kardashian Pregnant!