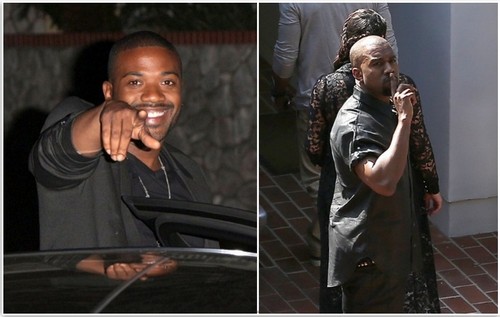 The BET Awards may actually be worth watching tonight. Not only is it possible that North West’s father will finally tear himself away from his new baby girl but he might also run into his baby mama’s sex tape partner and current nemesis, Ray J. Kanye West is up for four BET Awards which is signaling to some insiders that he is bound to make an appearance – especially since he’s still promoting his new album, Yeezus. Last week Ray J hosted the BET Awards Nomination Special The Chosen so he’s expected to be there as well.

Their handlers will be working overtime no doubt. Do you think they’re coordinating their red carpet walks and/or stage time? They’d be stupid not to. God, I hope an enterprising camera guy pans to Ray J while Kanye’s on stage and I hope he’s wearing a shit-eating grin. Too much fun at the BET Awards! Kanye West might play like he’s above it. He might act like Ray J isn’t worth acknowledging but the Kim Kardashian I Hit It First video/song can’t be too far from his mind. A sex tape a few years ago is one thing, capitalizing on it with a song and a video while Kim’s pregnant with Kanye’s first child is quite another. Besides, Kim’s a mother now. She’s bonafide. She’s natural. She’s… respectable? Why does motherhood do that to reality stars? So Kanye might be more protective and angsty and Kanye-ey. Which, let’s face it, is the way we love him best. A behaved Kanye West is a boring one indeed.

So, like I said, I might watch – or at least make it a viable flip. Ray J’s just dumb enough and Kanye’s just over-protective enough to throw down over Kim tonight, don’t you think?