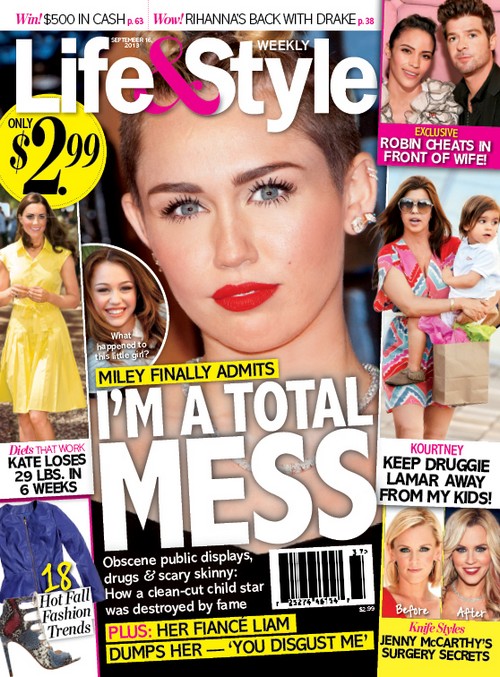 In this weeks issue of Life & Style the mag in a surprising move has pushed a Kardashian story has off of the main story to take one of the sidelines. No their power isn’t waning. It’s just Kourtney Kardashian. It’s only rarely that sister ever gets the cover. The only reason why she’s interesting now is because she reportedly banned Lamar Odom from going near her children. Though I hate to say it, she does have a point.

Lamar has been a part  of her kids’ lives from day one but at the same time no mother wants to explain why the uncle looks sick and skinny. Or why he’s passed out on the floor. Let’s go watch “Your Uncle Slowly Die from Addiction” is not a sold out exhibit. It’s merely a disaster. Khloe Kardashian may be willing to watch and see the oncoming train wreck but for once Kourtney is doing what is best for her kids and not anyone else. Yet this heart wrenching story got bumped while the frontispiece went to Miley Cyrus. Again!

Everyone is finally jumping on the bandwagon we’ve been riding since last year. Liam Hemsworth has had enough with his “fiancee” and really who can blame him? He’s a young man still trying to get his career firmly off the ground and the woman on his arm firmly brought back slut-shaming for the year 2013.  That’s embarrassing and he won’t want to bring that home anytime soon. That’s why he went alone to dine with his brother and sister-in-law. He honestly didn’t know what Miley could be capable of. Even Miley doesn’t know that. That’s why she’s a “total mess”.

However the magazine is skewing certain things. They’re right with Miley but then right next to her they mention Kate Middleton. Apparently her dramatic loss in baby weight is not worrisome but instead they wish to copy whatever she did.  They used this young mother to endorse stuff that odds are she didn’t use for how to lose nearly 30 pounds in 6 weeks. One, I’m pretty sure that’s not healthy. Two, Kate lost the weight through a combination of maintaining yoga throughout her pregnancy and is currently nursing prince George. What do you wanna bet they don’t mention that as part of their “diet”. Don’t you just love magazines. We look at the cover and we’ve either have to hear about trashy stars like Miley or we’re blatantly misled.