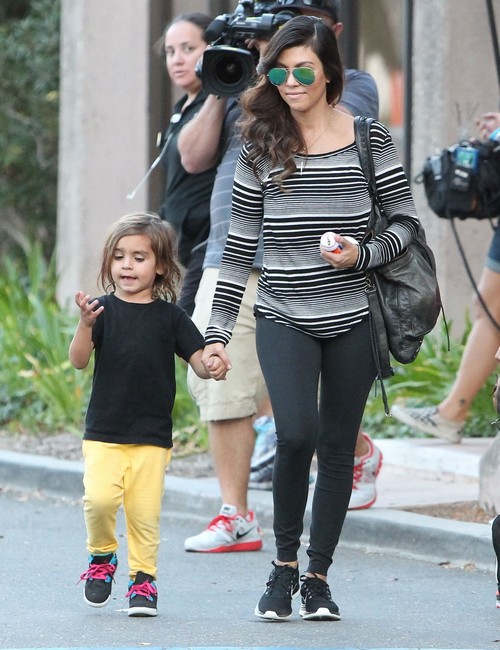 Kourtney Kardashian, Scott Disick and Mason Dash were out and about recently and were the ideal [at least in the photos] of a picture perfect family. Seeing them, you wouldn’t even know that they had another child, Penelope Disick.

Baby Penelope has barely been spotted in public, and it’s led some people to assume that Kourtney and Scott are playing favorites with their eldest. After all, it’s not like it would be the first time this sort of thing happened. Many parents naturally show favoritism towards their first-born child, even if they don’t mean it. When two people become parents for the first time, I think it’s safe to say that they become a little obsessive. They carefully plan every facet of their kid’s existence, and rarely let him or her out of their sights. But with the second kid, third kid, etc. it all starts to get easier, and you’re slightly more care free.

Mason was Kourtney’s and Scott’s firstborn, so it’s understandable why they’re so used to taking him out. Even in practical terms, he’s more used to the attention and the paparazzi, something Penelope hasn’t been exposed to as much. Kourtney and Scott could just be trying to protect their baby girl from the media spotlight for as long as possible, especially since their family has been so present on all the tabloids lately.

What do you guys think about Kourtney and Scott taking Mason out more? Do you think it’s favoritism, or are they just trying to protect Penelope? Let us know your thoughts in the comments.