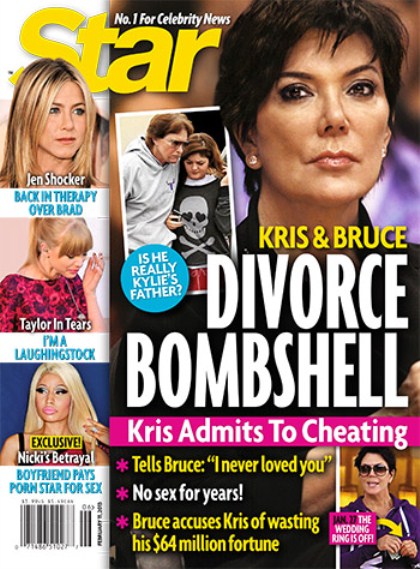 Kris Jenner admits that she is promiscuous, even in marriage – a self-described “slut” who has cheated on her husbands with a variety of lovers – so it’s no surprise that Star Magazine is asking if Kylie Jenner is actually Bruce Jenner’s biological daughter.  After all, we are pretty certain that Khloe Kardashian is not Robert Kardashian’s blood daughter so why would we expect Kris’s new crop of kids to be her current husband’s?  Kris has shown herself to be a sociopath who proudly admits cheating on her late husband Robert, marketing and producing Kim Kardashian’s sex tape, taking her young teenage daughters, Kendall and Kylie, permanently out of school to “model,” and in general, pimping out her family at every opportunity.  Nothing is sacred to Kris other than the dollar.

The cover of Star announces a ‘divorce bombshell’ signaling the bitter end of the marriage of Bruce and Kris.  Star puts that blame for the imminent end to the unhappy marriage squarely on Kris’s shoulders with accusations of cheating and depriving poor Botox Brucey of sex ‘for years!’ Kris allegedly tells Bruce “I never Loved You” which comes as no surprise at all. What’s love got to do with it?  Star claims to have a photo showing that Kris has symbolically removed her wedding ring – Yikes! On the financial end of things we are told that Bruce accuses Kris of wasting his $64 million fortune.  How exactly did Kris waste Bruce’s money – was it all on plastic surgery?  We’ll have to read Star to find out.  Will Kris let Bruce go?  We hope so for his sake.

Star reveals on the cover that Jennifer Aniston is in therapy trying to get over her obsession with Brad Pitt.  One wonders whether fiance Justin Theroux drives obsessed Jen to the shrink?  Do you think that Jen has gotten over losing Brad to A-list star Angelina Jolie?  For years all Jen could do was talk about how Angie ‘stole’ Brad from her but we all know that isn’t what happened.  As Brad has himself implied Jen was a superficial fame whore and his life with her was just no fun.  Why does Justin stick around? How badly does he need the money?  What is Justin doing with the talentless plastic-surgery-obsessed ‘Friend’ – Justin was once an actor, no?  From David Lynch to Rom Com crap – this is what Justin has chosen.

The cover also reports that poor Taylor Swift is in tears over being a ‘laughing stock.’  Are we to assume that people are laughing at her for her ridiculous and intentionally very public romantic life or her lousy music?  Maybe both?  Besides, are we to believe that aliens cry?