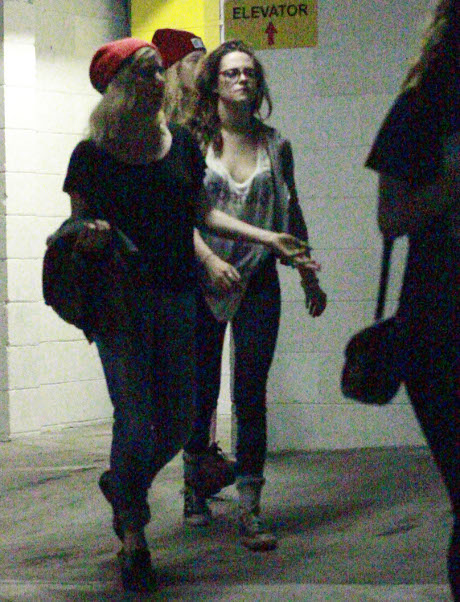 How has Kristen Stewart been handling her breakup from Robert Pattinson? According to Star Magazine, not so well. It’s pretty obvious that this breakup was initiated by Rob, after he realized that the relationship was just not working out. The reasons behind his decision have been hotly debated, with the consensus being that he still had not gotten over the cheating incident last summer, and Kristen’s ‘moody’ behavior wasn’t making it any easier for him.

Now, Star claims that Kristen’s been going off the rails since her breakup with Rob. A source tells Star that Kristen has been ‘stalking’ Rob, claiming, “Kristen has gone off the rails. Rob isn’t responding to any of her messages. She is partying like crazy. She is binge drinking and chain-smoking. She gets out of control and then starts texting Rob.”

Of course, we’ve seen both of them in the aftermath of their breakup and they both look happy – especially Kristen. She was pictured smiling and laughing with her friends just days after the breakup. However, several sources also claim that those photo-ops of Kristen having fun with friends were possibly set up by her team, which means she wants us to think she’s happy, even if she’s not.

Well, duh. She doesn’t want a repeat of last summer, where she told the whole world how devastated she was about ‘hurting’ Rob and then did a complete about-face and refused to talk about it. Better not give the public more ammunition, right?

Either way, it really does seem like the split is ‘more’ permanent this time around. Neither of them are going to reunite on filming for any more Twilight movies, and the only places they could run into each other is premieres and awards functions. And when that happens, we will be waiting and watching the glorious awkwardness that their eventual on-camera meeting will bring.