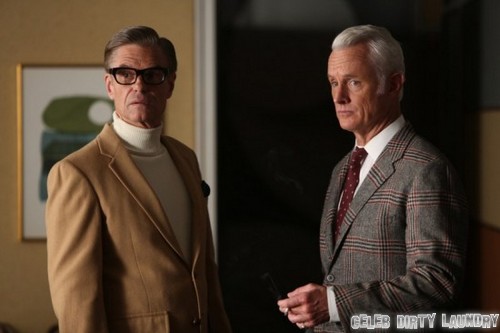 MAD MEN continues tonight with another new episode called, “In Care Of.” Sadly, tonight is the season finale and another season is over! On tonight’s show Don has a problem, what’s new? Did you watch last week’s episode? We did and we recapped it here for you.

On last week’s show Sally went to visit a boarding school and it seems like she fit right in. Peggy and Ted’s flirtations heated up and both Megan and Don caught them at a movie together. Ken didn’t want to do the Chevy account any more, Pete took it over but there was one catch, Bob is going to be his right hand man.

On tonight’s showDon begins to feel overwhelmed while dealing with a very serious problem of his own which leads to the agency partner desperately searching for a solution.” The only serious problem I could think Don could have is if Sylvia is pregnant, can you just imagine the scandal! Sylvia was very clear that she could never have an abortion because of her catholic values, that would mean Don would have to come clean to Megan on his affair with Sylvia. Sally is obviously messed up after seeing Don and Sylvia together, a new sibling caused by her father’s infidelity might drive the poor teenager over the edge.

We will be live blogging Mad Men Season 6 FINALE at 10PM EST . . . so make sure to come back to this spot and watch the show with us. Make sure to refresh often so you get the most current info! While you wait for the episode you can catch a sneak peek of tonight’s episode BELOW!