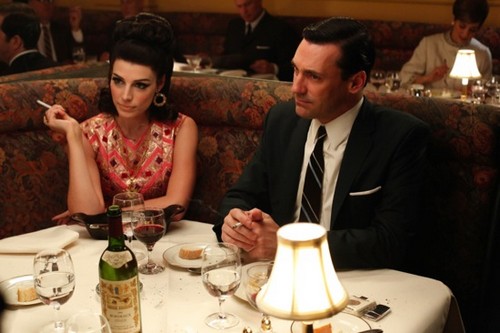 Tonight MAD MEN returns with a whole new episode called, “To Have and To Hold.” On tonight’s show The partners work to keep the wraps on a secret campaign. Joan is visited by an old friend. Did you watch last week’s premiere episodes, there were 2? We did and we recapped it here for you.

On last week’s show which was directed by Jon Hamm, Don got into a disagreement with a client while Peggy was busy motivating the staff and Pete entertained a client.  Roger and Don seemed to be at odds about something and Megan continued to be the dutiful wife still unaware of Don’t cheating.  We got to find out why Don had a sore spot when it came to Joan selling herself, he was forced to live in a boarding house of ill repute when he was younger and his father died where he watched Abigail sell herself to provide them room and board.

Megan revealed that she had a miscarriage but not to Don, Pete crossed the line with Trudy and was banished to the city until further notice and Ted told Peggy to go after Heinz Ketchup. Joan had to see sleazebag Herb when he was in the office and it reminded her how she landed her partnership when he leered “I know there’s a part of you that’s glad to see me.”

On tonight’s show we get to see Stan walking away from the rest of the copywriters and into a private room, my guess is that he found about Peggy’s new firm going after Heinz Ketchup and is upset about being used. Joan and Pete seem to be angry at the same person, wonder who that is? Ken gets frustrated with Don and Pete has some dialogue with Trudy, do you think he is begging her to let him back in after his romp in the hay with the neighbor?

Tonight’s episode looks like it is going to be a great episode and you won’t want to miss it, so be sure to tune in for our live coverage of AMC’s “Madmen” Season 6 episode 4 at 9 PM EST! While you wait for our recap hit the comments and let us know how happy you are with Mad Men season six so far.  While you wait for the recap, check out the sneak peek of tonight’s episode below!