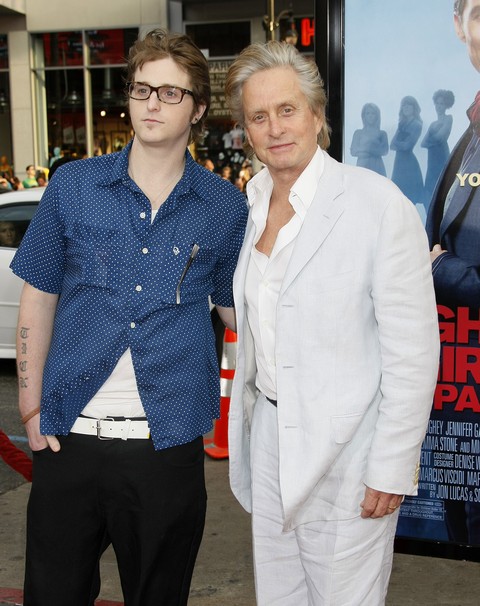 Michael Douglas and his ex-wife, Diandra De Morrell Douglas, are furious about their son’s ‘barbaric’ treatment in prison. Even though their own relationship is contentious, Michael and Diandra have previously stated that their goals regarding their son are in agreement, and they both don’t think that Cameron Douglas deserves what he’s getting right now.

Because according to them, he’s not a drug dealer. He’s just an innocent little boy who was in the wrong place at the wrong time, who may have made a few bad choices in his past. Diandra even says to TMZ that she thinks that Cameron is being treated like ‘an animal’ while he’s been in solitary confinement at a Federal Prison in Maryland.

Cameron is currently serving ten years for heroin possession and dealing narcotics, and he recently failed a drug test while in prison – which means that all of his talk about being ‘clean’ and changing his ways was all a pile of crap.

I can understand Michael’s thoughts, even if I don’t agree with them. He just wants to visit his son, and as part of the sentence, that’s not allowed. Considering that Cameron is a convicted drug felon, it’s obviously a smart precaution taken by prison officials to prevent any more drug smuggling since Cameron has already brought drugs into prison while an inmate. However, I cannot understand Diandra’s comments. Of course, she’s his mother and mothers are irrational in this way. But to claim that Cameron’s not being treated right? He got the punishment he deserved. And as for her claims about his hair falling off and him not getting exposed to sunlight – this isn’t a spa or a rehab center. It’s a prison. It’s not supposed to be a place where your hair grows luxuriously and you get to stroll out in the daylight.

What do you guys think about Diandra’s comments on Cameron? Let us know your thoughts in the comments.