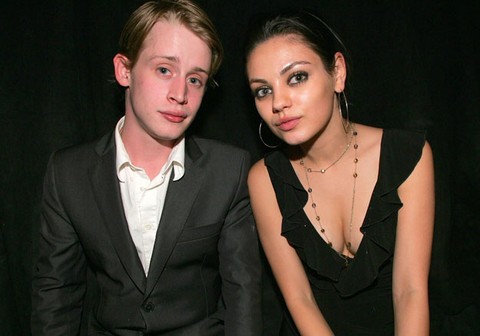 Uh-oh, Ashton Kutcher better watch out because drug-addict Macaulay Culkin thinks he could possibly win back his ex-girlfriend Mila Kunis. The troubled star who was in a strong relationship with the ‘Friends with Benefits’ actress from 2002 up until January 2011, lost the love of his life after refusing to go to rehab and seek medical treatment for his heroin addiction which saw him spend thousands of dollars a month on the killer drug.

New reports are claiming that though Macaulay chose heroin over Mila at the time, he has changes his ways and totally regrets dumping his girlfriend who, not only tried to help him, but she looked after him and loved him affectionately. Aww, how cute! Now magazine‘s sources say that Culkin reached out to the 29-year old via phone call to let her know he stills loves her very much before apologizing about how their relationship ended and hopes that they could try again. Macaulay is aware that Ashton is now the only man in Kunis’ life, and in no way does he want to disrespect their relationship,- all he wants to do is let Mila know that he is a changed man and he’d be willing to wait for her as long as it takes.

“It was a bad call and he regrets it now. Mac’s been having a hard time lately so he rang Mila to tell her she was the love of his life. But the last thing he wants is to piss off Ashton,” the source tells the mag. ‘He later sent her an apologetic text to try to smooth things over,” in reference to Kutcher being pissed out her ex-boyfriend calling her.

Whether or not Kunis would dump Ashton – a pretty good looking fella who makes $1 million per episode on Two and a Half Men – for a loser who has nothing going on with his career, is uncertain, but seeing that they were in a relationship for so long, it’s not impossible to say that Mila’s feelings for Mac may come back and she’ll want to run back to him. A source recently revealed how their relationship came to an end: “While Mila was going on about how a long, intensive stint in rehab would help get his career back on track, Mac played dumb. He kept saying, ‘I don’t know what you’re talking about, Mila. I’m doing great.’” All Ms. Kunis was trying to do was help him, but he was in denial.

Damn! A hot chick like that went out with a dude like him for eight years?!!? If it ain’t the looks she was after, it must have been his p– oh never mind! Ha! Hopefully Ashton is giving it to her good… that way she never has to cheat on Kutcher. LOLz! Could you imagine Mila going out with Ashton, but secretly sleeping with Macaulay because Ash can’t satisfy her in the bedroom? Now that would be hilarious.