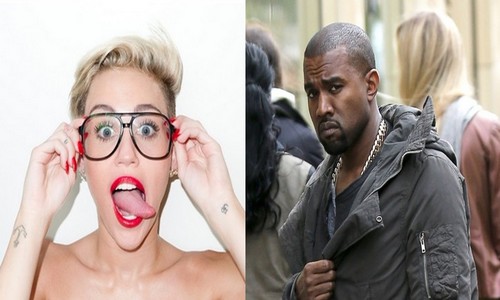 So as CDL was first to report last week, Kanye West and Miley Cyrus‘ relationship seems to be raising a few eyebrows. First, Miley gave that really in-depth interview where she waxed poetic about how awesome Kanye was and how close they were. Then, she revealed that he admitted that she ‘inspired‘ him, which is way nicer than anything he’s ever said about his own girlfriend, Kim Kardashian.

Of course, In Touch Weekly’s new cover is now alleging that Kanye has a ‘creepy obsession’ with Miley, and it’s supposedly getting out of hand. Yeah, I think we figured that out already, thanks tabloid writer.

Kanye has a lot of weird obsessions with weird things, but given the chance, I don’t doubt he would cheat on Kim Kardashian in a second. After all, he is an ‘Artist’, and I’m sure he appreciates other ‘Artists’ like Miley. They all have a very high opinion of their own abilities and their contribution to the world, and they think they’re a lot more awesome and innovative than they actually are. Read any one of Kanye’s interviews, and you’ll either try not to bust a gut from laughing or shake your head continuously from Kanye’s own feeling of grandeur and self-delusion. It’s truly at epic proportions.

And recently, looking at Miley’s interviews, she definitely seems to be getting influenced from him because they’ve been the same things. So if they’re hanging out, he has that much influence on her, and he ‘admires’ her so much, there’s no doubt in my mind that something could happen if they let it happen. And Kim who? Please, does Kim actually matter?

What do you guys think? Is there something going on  between Miley and Kanye, or is it just assumption? Let us know your thoughts in the comments.