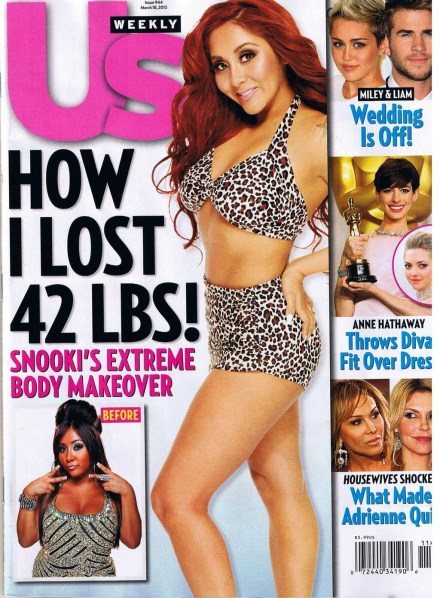 Have you caught a good look at Nicole “Snooki” Polizzi lately?  I mean a really good look? I think morphing into a redhead was meant as a distraction for a while so that she could then go through a full body transformation. Since giving birth to her son last summer Snooki has been on a mission to whip herself back into shape and from the looks of things she’s definitely there.  The reality star is covering US Weekly’s latest cover in a two piece suit that shows her 42 pound weight loss. It makes me wonder if her wedding is around the corner and if that has provided motivation to get back into fighting form.

Also in the new issue there’s inside details on Adrienne Maloof’s departure from The Real Housewives of Beverly Hills. Last season fellow cast mate, Brandi Glanville decided to blab about Adrienne’s hiring a surrogate to carry her twins and the 52-year old flipped out. She made the producers delete and edit scenes so that this secret wouldn’t be divulged on air. Then Adrienne herself sold the story to a magazine to cash in on it. Her greed is supposedly what got her fired.

US Weekly is also on top of the break up rumors that involve Miley Cyrus and Liam Hemsworth.  The couple hasn’t been spending much time together thanks in part to work and it is rumored to have caused serious problems for them. Miley is working on her next album while Liam is filming a movie and he is supposedly pissed because she’s making time for everything but him. I’m not sure if the wedding is even on at this point. You’ll have to grab the latest issue of US to read more about these stories and lots more.

Do you think that Miley and Liam will really get married? Tell us your thoughts in the comments below!