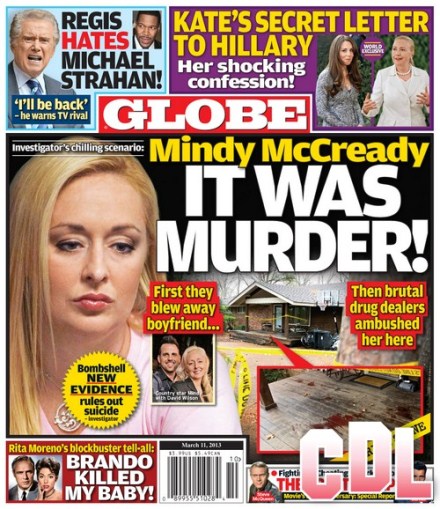 ‘Mindy McCready It Was Murder!’ screams GLOBE’s shocking headline this week. According to GLOBE’s cover of the March 11th, 2013 print edition, Mindy did not die from a self-inflicted gunshot wound at all.  The disturbed and addicted star reportedly did not kill herself – she had help from evil drug dealers.  In fact GLOBE’s exclusive crime-scene photos, on display in the magazine, call into question initial findings indicating that Mindy’s death was a suicide.

The theory elaborated upon by GLOBE is that Mindy and her late boyfriend and baby daddy, David Wilson, were both in deep trouble with violent drug dealers.  First David was blown away several week’s ago and was found dead in his home on January 13 – his case is still unsolved.  Then once Mindy was released from psychiatric confinement the beastly criminals struck again, murdering the grieving mother. Inside this week’s edition of GLOBE we will learn why an investigator rules out suicide in a bombshell new report.

Mindy had a crazy messed up life. From her under-age sexual liaison with steroid-cheat Roger Clemens, to an ugly split with Dean Cain, the singer never seemed to get it together and make the most of her career.  Perhaps damage done when she was still young sent her on this tragic path resulting in a violent and premature death.

GLOBE also hints at a scandal brewing involving Kate Middleton and Hillary Clinton of all people!  Apparently Kate has penned a shocking letter to the Hillary in which she makes a grave confession.  I hesitate to even speculate upon what the nature of what Kate’s confession might be or why she chose to make it to woman who has occupied the influential positions of FLOTUS and Secretary of State. Could the confession be of international importance?

As if that is not enough reason to get your copy of GLOBE, we also learn that a war is brewing between Regis Philbin and Michael Strahan.  GLOBE says that Regis hates Michael and has warned his TV rival “I’ll be back.”  Regis is all worked up for nothing.  No point blaming Michael for the trend in TV, and entertainment media in general, to sideline aging straight white males!  Call it a day Regis and quietly shuffle off to a pleasant retirement.

Rita Moreno claims in a blockbuster tell-all that Marlon Brando killed her baby!  That is a serious accusation on the face of it so we’ll have to read the print edition to learn what Rita really means.

Globe offers a special report marking the 50th anniversary of the release of the movie classic ‘The Great Escape.’  We learn all about how the late Steve McQueen and James Garner were involved in the off-camera cheating, backstabbing, and fighting.

This week’s GLOBE goes further than any other magazine to present the most fascinating stories.  We get to learn the truth about what really happened to Mindy McCready and boyfriend David Wilson from a special investigator.  Be ready to see the horrifying crime scene photos right inside the print edition.  I have never been more eager to get my copy of GLOBE than this week!  Apart from all the other great reporting I look forward to I am intrigued, to an unprecedented degree, with the story about Kate’s secret letter and confession to Hillary.  As soon as I post this I’m zooming off to the store to get my copy.  GLOBE has once again beat all rivals in producing the pick of the week in magazines. Great job folks!