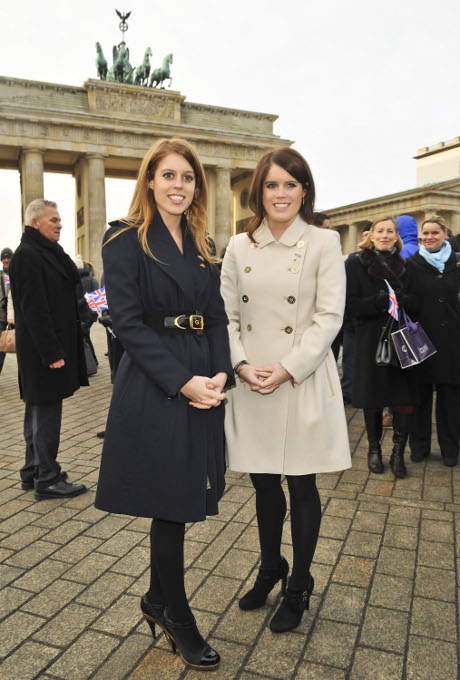 Is pregnant Kate Middleton, our lovely leading royal lady, slowly and tactfully being replaced by Prince William‘s cousins, Princess Beatrice and Princess Eugenie? It’s hard to conceive such a notion, but the royal drama continues to escalate as Beatrice and Eugenie sweep into Germany for their two day extravaganza — a royal roadtrip of sorts with one goal in mind: show the world that these two princesses deserve a bit of attention, and should be treated like the royals they were born to be.

Honestly, I’m not that into royal drama, but this story had me intrigued, largely due to the fact that Prince Charles is trying to make some major royal cutbacks. Prince Charles attempts to be awesome on a regular basis and this year — in his oft-times failed attempts to be awesome — he thought he’d cut back royal duties of the extended family members and resituate the duties amongst his own family. Prince Andrew saw his royal clout severely reduced, and Princesses Beatrice and Eugenie (what unfortunate names, right?) were told that they needed to find jobs pronto. They were even told that they’d have to pay rent *GASP* like a person of normal, significantly less-royal blood.

But Prince Andrew, clearly bitter, and his daughters aren’t going to settle into the woodworks quietly. They’ll stay relevant and in the public eye, even if it means spending the money from their own pockets and cutting back on the tea and biscuits. Apparently, Eugenie and Beatrice’s current tour wasn’t funded by the government but out of Prince Andrew’s personal pocketbook. I guess this just goes to show how freaking desperate they are.

An insider for the Daily Telegraph (via The Daily Beast) reports that Prince Andrew isn’t ready to relinquish his family’s royal agendas. The writer of newspaper article reports the following: “The trip was entirely at the behest of the girls’ father, Prince Andrew, I understand, and Government sources seem fairly keen to distance themselves from it. “You have to understand with the Royals: they do exactly what they like,” one exasperated insider told me, adding that when it came to Prince Andrew, “it’s totally uncontrolled”. Is it possible that Prince Andrew wants to ensure he and his offspring get to share some of the limelight? He’s clearly keen to retain his status on the world stage, despite stepping down as the UK’s special representative for trade in 2011 after criticism of his association with a convicted underage sex offender, Jeffrey Epstein.”

Despite this cray-crazy controversy of royal proportions, the two princesses reportedly did quite well on the first leg of their tour. They were surprisingly well received. Could this be a sign of what’s to come? Will Beatrice and Eugenie soon be the royal duo to compete with? Interesting . . . .

Today, the two princesses will be visiting royal ancestral palaces in Hanover. Let us know your royal concerns in the comments below!