Queen Elizabeth Apologizes To Kate Middleton With A $10 Million Gift 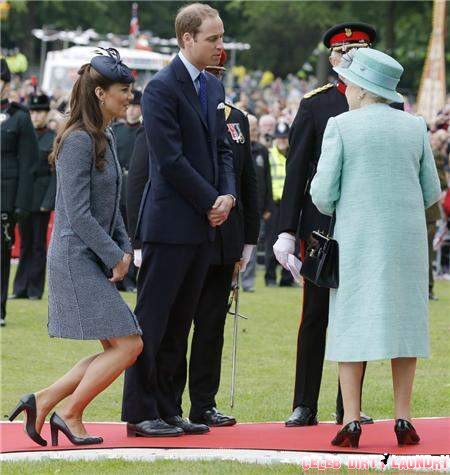 Kate Middleton and Prince William have received a $10 million push present from the happy great-grandma to be, Queen Elizabeth II.  The little gift is in the form of property, something the royals know all about since they own so much of it.  Hey, it’s good to be Queen!

Kate and Will will be the new owners of Anmer Hill, described as a late Georgian country house which sits on the grounds of the Sandringham estate and is just two miles east of the Queen’s Sandringham House. Sadly for the prince Anmer Hill was one of Prince Charles favorite love nests – but not for love-making with William’s mother, Princess Diana!  Anmer Hill was where Will’s dad hooked up with Camilla Parker-Bowles for clandestine sex while he was cheating on Diana.  One has to wonder whether Queen Elizabeth is still all there.  Who wants to own and spend time in the place where one’s father cheated on one’s mother?

All that ugliness aside, perhaps the Queen’s gift is self-serving.  Life & Style suggest that an estate close to Sandringham, where the Queen spends Christmas, will encourage the young couple to spend more time with the monarch.  Don’t forget that this past holiday season Kate and Will slummed it with the Middletons for Christmas and only visited the Queen on Boxing Day.

“There’s been a lot of tension between the queen and Kate, so giving them Amner Hall is definitely a peace offering,” they explain.

Though the queen may believe she’ll be able to increase her influence over the young couple since they’ll live so close by, insiders say that’s not going to happen.   “They hugely respect the queen, but Prince William’s determined that they’ll remain as independent as they can be,” says an insider. “He wants to do things their way.“

The 10-bedroom Georgian mansion on the queen’s Sandringham estate has been in the family for quite some time. While William, 30, and Kate, 31, have yet to confirm whether they’ve accepted the gift, it does hold a special place in their hearts.

“William and Kate went to that cottage when they were dating,” royal expert Yvonne Yorke tells Life & Style. “And they love that it’s a quiet, normal, away-from-the-public-eye kind of place.“

Celeb Dirty Laundry has an alternative theory explaining the gift.  After the Queen’s Jubilee Balcony incident during which commoner Kate was allowed to stand with the Queen while Prince Andrew’s brats, Princesses Eugenie and Beatrice, were banished, the Queen issued an infamous edict commanding Kate to curtsy before the snotty bitches whenever William wasn’t around. This curtsy order was a form of compensation to the senior royals but came at Kate’s expense. Now the tables have turned: Prince Charles has fired Andrew’s kids from the royal firm (they are off of the public payroll) and Kate is pregnant with the future monarch.  So while Queen E can’t very well rescind the royal decree that humiliated Kate she can try to bribe her way back into Kate’s favor.

Let’s not forget that times have thankfully changed and the Queen is a mere figurehead who can’t really order anyone to do anything.  This means that if Kate wants to be spiteful she has the legal right to exclude the senior royals from much of the expected joy surrounding the coming birth of the heir (her baby) to the heir (William) to the heir (Charles) of the British Monarchy.  Perhaps it’s time the Queen considering gifting some of the Crown Jewels?