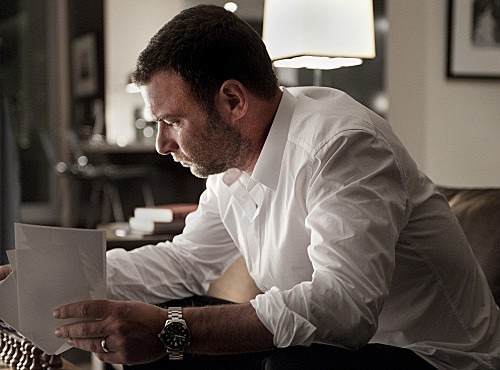 Tonight on Showtime the highly anticipated drama starring Liev Schreiber called RAY DONOVAN airs with its series premiere.  In that show, Liev (Ray Donovan) is the ultimate fixer, and tries his hardest to be the go-to man for rich people with problems that don’t seem to go away.

This will be Liev’s first lead in a television series, we are use to seeing in on the big screen.  The cast is rounded out by Jon Voight who plays his father Mickey Donovan, Steven Bauer, is  #1 and an imposing Israeli and Elliot Gould who plays his mentor.  With the star power in the cast it is guaranteed to be a hit.

The premise of the show is “Ray” is the man called in to make the city’s celebrities,’ superstar athletes,’ and business moguls’ most complicated and combustible situations go away. This powerful drama unfolds when his father, is unexpectedly released from prison, setting off a chain of events that shakes the Donovan family to its core.

On tonight’s premiere episode Ray’s life is thrown into absolute turmoil when his father Mickey unexpectedly gets out of prison five years early, kills a priest, and arrives in LA, vowing to take revenge on Ray for framing him. Meanwhile, Ray’s mentor, Ezra Goldman (Elliott Gould), and his law partner, Lee Drexler (Peter Jacobson), need Ray to find a way to get a “straight” action star out of a scandal with a transsexual. Ray must also protect a beautiful singer from a stalker, but the case leads to tension between him and his wife, Abby (Paula Malcomson).

Tonight’s series premiere looks like it going to be great and you won’t want to miss it. So be sure to tune in for our live coverage of Showtimes’s Ray Donovan series premiere — tonight at 10PM EST! While you wait for our recap check out the sneak peek video below of tonight’s episode!

RECAP: The show begins with Mickey getting his belongings just before he leaves prison, the guard wishes him good luck. Outside the prison, Mickey has someone come by and pick him up. Mickey goes to see a pastor and shoots the guy in the mouth, dead.

We now move to where a guy is in bed with this woman, he turns her over and she is dead; there is blood coming out of her mouth.

Ray is in bed with Abby, the neighbors music is so loud that it wakes them up.

Ray gets a call from the guy, Washington, who has the girl in the bed dead, he tells him that he didn’t screw her, she was sniffing cocaine all night. Ray encourages him to check the girl’s pulse, she is dead.

Ray is up for breakfast, he finds his son got a shiner at school. Ray gets his team on the new case.

Ray goes to see Lee, Tony is there and he is really upset and embarrassed. Ray leaves with Tony and leaks a story to TMZ about the dead girl. Washington is thrilled to find out that Tony is going to take the rap for being in bed with the dead girl.

Ray is with another client, he has been seeing this chick and wants to know if she is screwing around on him; Lee told him that Ray is the best in town. He claims the girl is a singer like Britney Spears. Ray tells him that he will be in touch.

We are now in a group session where people are talking about a priest who raped them. Bunchy is in the session, Ray calls him but he tells him no matter how much money he got over this, he still has a hard time dealing with it.

At the beach, Ray is spying on a woman who is doing some sort of yoga outdoors, Ray knocks on her door and tells her that she has a stalker. The girl is upset, she knows that Stu is paying Ray to spy on her. She asks Ray why they never became a couple, he tells her that she is not his thing. She checks out his heart line on his hand and tells him that he falls in love easily, then she jumps him and he grabs her and goes for it with a huge kiss. He slams her up against a wall and we think they are going to go at it when she has some sort of  seizure. She claims she has epilepsy and is not supposed to drink sugar. He tells her to stop opening her door to strangers and get a dog, not a gun. She thanks him for his time, he tells her to stop doing yoga on the deck.

Terry goes into a bar and finds Bunchy, he tells him that the party is over and the two get into a fight.

Ray gets a call, he heads to Donovan’s Fight Club. Ray gives Bunchy a hug who tells Ray he has been sober up to this point. Terry tells Ray that their dad had a kid with Claudette, he’s grown now and his name is Daryl. Ray is pissed that Terry kept it away from him for a long time. Terry tells him that there is something else, the old man got parole. Ray is surprised, he wasn’t supposed to be out for five more years.

Mickey is with a woman in a hotel room, smoking and dancing.

Ray is in Bob’s house, he is the guy who is stalking the girl; Ray lets him choose between the bag and the baseball bat. The guy chooses the bag, then we see the guy in the bathtub with some sort of green dye, he looks like the jolly green giant, Ray tells him if he goes near the girl again he will kill him.

Ray is home, Abby is upset with him, she tells him that she hates it there and he needs to pay more attention to his family. Abby asks if he is thinking about Ezra, he tells her that Ezra is the most important person in his life.

The next day, Abby and Ray head to a funeral for Ruth. Ezra is upset, he tells Ray that he has to come clean.

We see Mickey in an airplane, he is watching a woman breastfeed her baby and he winks at her, what a creep!

Ray is with Ezra and his mistress, Ezra is really upset when Ray tells him that his father is coming and he doesn’t know what he wants. Ezra turns to Ray and asks why don’t they kill him.

Ray walks in and finds Abby with Stu’s ex. Abby wants to drive her home, but Ray says he will do it because she was drinking. In the car, Ray is pissed and all of a sudden this girl goes down on him while he is driving. At the end, he tells her to never come near his family again.

Abby leaves Ray a voice message, she is furious and tells him not to come home.

Ray is at his place in town, the girl alls him and says she can’t stop thinking about him, he says try and hangs up on her. Ray looks over at a picture of Marilyn Monroe and thinks she is asking him to screw her.

Ray then has some weird screwed up nightmare with a little kid in a car with a priest and a woman falling off a building.

Ray goes home, he finds Abby in the kitchen and she asks him if he screwed the girl, he says no. His son is at his computer, Ray says hi and asks if he is ok. Ray then follows Abby to the bedroom and tries to speak to her. Ray tells her that his father is coming, he made parole, Abby asks if that is why he was acting like such an asshole. Ray then tells Abby that he has a black half brother, she starts laughing and says that is crazy.

Abby and Ray are now at an outdoor party, Lee walks up to Ray and all of a sudden they see Ezra knee deep in the water. Ray sees Tommy in the pool and tells him to get out. Abby goes to speak to Stu and he tells her that he knows Ray screwed his girlfriend. Stu starts running when he sees Ray come after him; I think Ray broke Stu’s hand on the end of a pool table.

Later, at home, Ray’s daughter wants to know how Bridget died. Ray says that she was high on drugs and jumped off a roof. Ray says he misses her, she could make Bunchy piss his pants. Ray tells her that he will always protect her, they are good. Abby walks in and announces that she is hiring a realtor. Ray tells her that he knew the girl years ago, he protected her once and she got confused. Ray says the important thing is that if his father comes near their family, everything will be over, whatever she thinks happened, will be ten times worse. Ray tells her not to let the wolf in the gate, he then asks her if his father reached out to her. Abby tells Ray that he is sick and has a whole in his heart.

Ray heads back to the fight club, he is there with Bunchy who tells him to go easy on his father, he just wants to make amends. Mickey walks in, he makes a joke about the Catholic church. Mickey calls Ray a MF’er for setting him up. Mickey tells Ray that he took care of the priest, but people are going to come after him. Ray chuckles and calls Mickey a deluded old *uck. Mickey asks how his grandchildren are and Ray grabs for his throat, he tells him that if he goes near his family he is going to kill him.

Stu’s is doing her yoga on the balcony when she sees the green guy and starts yelling. We then see Terry take his medication while Mickey and Bunchy are sniffing cocaine. Ray goes to see the green guy and takes the baseball to him, he tells him that he warned him.

Mickey drops by Ray’s house, Abby opens the door – he tells her that pictures don’t do her justice and the letters he wrote her were from the bottom of his heart; Abbt opens the door and lets him in. Ray’s daughter comes into the hallway and hugs Mickey.

Wow, what did you think about the episode? I loved it, Ray is one messed up guy but you have to love him. I can’t wait to see if ray takes a baseball bat to his father when he finds out that he went to Abby and his children behind his back. Till next week!