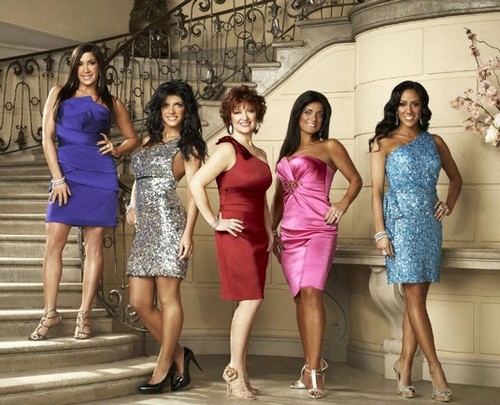 Real Housewives of New Jersey star Teresa Giudice and her family made amends in season 5. However, the reunion episode for this season will not be short on drama. The tension between Teresa and her sister in law Melissa Gorga is still high.

Andy Cohen asked the women about the cheating rumors surrounding Melissa and the involvement of Penny Drossos in spreading the rumors. The stories go back two years, alleging Melissa used to be a stripper and that she cheats on her husband. The J-Lo wanna be continues to believe that Teresa was involved in the scandal. Teresa owned up to her part in hurting Melissa and admitted she should have been more supportive of Melissa instead of watching her get attacked.

Nothing Teresa says or does is good enough for Melissa because she won’t let the issue go. I get that the allegations against J-Lo light were very serious and it would be hard for anyone to move past what happened. It’s going to take time for Melissa to be able to trust her sister in law again. However, Mel is still keeping the feud going because she won’t even acknowledge that Teresa finally came clean and apologized. In a preview for the season 5 reunion Tre’s patience finally hit a breaking point. She exclaimed “How do we stop this? Because it keeps going around and … I’m exhausted. I’m done, done, done! I’m done defending myself, I’m mentally exhausted!”

Teresa was not innocent in all the hurt the Gorgas experienced the last two years. However, the real root of the problem is Melissa. She took digs every chance she could at her sister-in-law. At the beginning season 3 when Mel was first introduced to us she talks about how hard her husband works. She says “we pay our bills”. The inflection in her voice indicates her disdain for Tre and her husband Juicy Joe Giudice. In season 5 the cast sort of made up at a healing retreat in Lake George. Things were a lot better between the Giudices and the Gorgas, but Melissa was the only person who would not admit it takes two to tango. Tre and Juicy invited the Gorgas and their kids to Sunday dinner, where Melissa immediately stirs the pot again. Teresa said she was glad they weren’t fighting anymore. Mel retorted “Be a good little girl and there will be no more fighting”. Tre was surprised at Melissa’s statement. Melissa said over and over she wants peace in the family, yet she starts trouble.

The real test of this family’s relationship is will be during Tre and Juicy’s fraud trial, which starts in February 2014. Melissa said her and Poison will be there for Tre’s family no matter what. I don’t believe her. I think Poison will be there for his sister because he fully made up with her and Juicy. Melissa has no choice but to willing to help the Giudices because her husband will insist she do it.

I think part of what is keeping these two women from being friends is they have to relive everything once it airs on television. It keeps everything fresh in Melissa’s mind. However, Melissa will not forgive Teresa no matter how much time passes. She is a bitter person who is jealous of her sister in law. Melissa was so hot to get on the show because she wanted the same opportunities it brought Teresa.

Her sister-in-law built a very successful empire while all she had were 3 kids and very demanding husband. Melissa said in season 3 she always wanted to be a famous singer, yet she only began pursing this dream when she became a cast member. Now she is a J-Lo wanna be, and now she looks like J-Lo. Mel said she did not have plastic surgery on her nose but used makeup to contour. Mel had some very minor success with her music but she has a very very long way to go to catch up to her New York Times best selling author Teresa.

Atlanta cast member NeNe Leakes called Melissa out on Watch What Happens Live. NeNe said Tre was on the show first and Mel should not have tried to join, too. Melissa tried to spin it saying new cast members make everything interesting. Mel must not have watched the first 2 seasons because there was a lot of action before she joined the show. Frankly, it was also a more interesting show before the producers changed the story line to reflect Tre’s feud with the Gorgas and her cousin Kathy Wakilie.

Season 6 has not yet been announced. Bravo will make that decision after the 2 part reunion airs. It’s safe to say another season is being considered. There are reports of a cast shake up if the show goes into another season. We already know Caroline Manzo will not be returning and Caroline’s sister Dina Manzo may return. Of all the Real Housewives franchises New Jersey is #2 (Atlanta is #1). These ladies make Bravo a lot of money.