See Selena Gomez Bump Into Barbara Palvin At Golden Globes After Party – How Awkward Was It? (Photos) 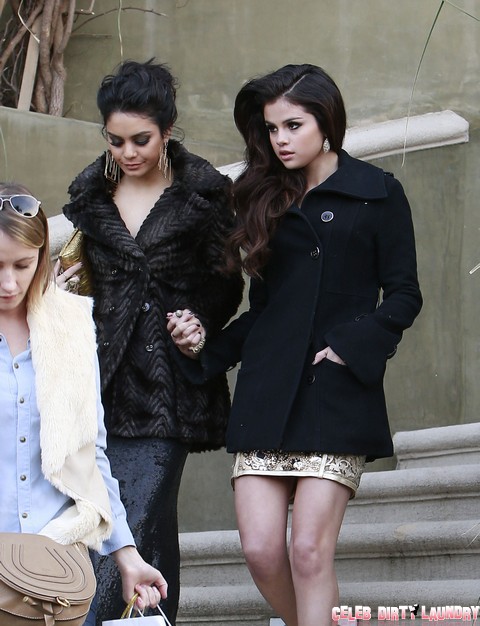 There’s nothing more awkward than bumping into the person your ex-boyfriend cheated on… but hey, it’s Hollywood – the land of covert affairs and celebrity liaisons. At a recent Golden Globes after party – the one where Selena Gomez hooked up with Josh Hutcherson – Barbara Palvin, Justin Bieber’s Victoria’s Secret lover, chilled at the after party as Selena walked in.  Awkward!

According to latest reports, when Gomez arrived at the Warner Bros. after party with her BFFs, Vanessa Hudgens and Ashley Tisdale, Palvin was already there. This not only caused one of the most jaw-drop moments of Gomez’s life, but it also served up a dish of “I am Selena Gomez. Who are you, bitch?” Selena and her girls danced and laughed and danced and drank some or another alcoholic beverage and gave Barbara the stink-eye. (We’re not sure of the finer details, but it’s fun to speculate!) Barbara looked “gorgeous”, but Selena looked even hotter. (There’s nothing like a break up to put the flash back into your eye and the rouge in your cheeks!)

Was it planned? Did Barbara know Selena was going to attend so she also pitched to make things awkward? This isn’t normal life – it’s not a case of, “I wonder what that bitch looks like…” More importantly, does this cast doubt on the whole Selena/Josh flirting? Was Selena actually flirting with Josh in order for Barbara to see that she’s moved on? So many questions, so little time!

Barbara denied any romantic relationship with Bieber back when the backstage Victoria’s Secret photos went viral. We believe her, but does Selena do too?  What do you think readers? Do you think they planned it? Do you think Barbara had an affair with Bieber? Do you think the two spat acid when they saw one another? Let us know your thoughts in the comments below.