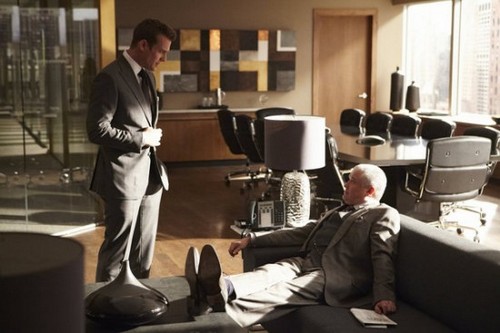 Tonight on the USA Network SUITS returns with the season 3 premiere called, “The Arrangement.”   If you have not watched the show before : “Suits” delves into the fast-paced, high-stakes world of a top Manhattan corporate law firm where Macht stars as legendary law partner, Harvey Specter, and SAG Award-nominee Adams stars as his brilliant, but not-technically-legal associate Mike Ross. Despite his lack of bonafide credentials, Mike’s photographic memory and encyclopedic legal knowledge make him an invaluable asset to Harvey.

On tonight’s season premiere for all you Game Of Thrones fans Michelle Fairly, famous for her role as the late Catelyn Stark on the wildly popular series Game of Thrones, will be making her debut this season as a guest star. While fans of Catelyn won’t be seeing her in medieval-esque garb, Fairly’s confident charisma should prove to be a wonderful asset to this already strong show.

Tonight’s season 3 premiere episode looks like it is going to be great and you won’t want to miss it, so be sure to tune in for our live coverage of USA Network’s “Suits” at 10:00 PM EST! While you wait for our recap hit the comments and let us know ho excited you are for the season 3 premiere of Suits tonight.

Mike awoke from a nightmare. It reveals his fear that now Rachel knows the truth, she’ll turn him in. Harvey attends a contract meeting in person. However his usually bravado lands him into bluffing too big for Jessica’s preference. Jessica accuses Harvey for trying to self sabotage. But he tells her that he could have gotten out of his contract at any time. He stayed and she needs to accept it instead looking for what’s behind it.

Mike goes to Rachel’s house. He tells her about his nightmare. He says it wasn’t fearful about her turning him in but he is scared about possibly losing her. Rachel still needs time for herself but she does offer him some advice. If he’s so worried about an arrest why doesn’t he just go in and quit. It’s not as if he still has Harvey there anymore.

Mike goes in to see Jessica the next day. She shows him around his new office with the wonderful views. After heartfelt story, Jessica asks him does he still have something to say to her and Mike, weak Mike, tells her no.

The new merger is upsetting Louis. Because of the merger they are using different pens. He tries to explain to Donna how he really loved his pens and he of all people won’t be buying his own. Unbeknownst to Louis the smudge of his new pen ended up on his lip replicating to a mustache worn by Hitler. Donna doesn’t tell him though. She has him exercising in a Third Reich fashion.

Jessica’s new partner makes his first demand. He wants them to represent a Ms. Ava in a trial against the federal government. Fifty/Fifty didn’t last long. However Jessica is going turn it into appositive. She goes to Harvey and tells him he’s on the case. She’s trying to make peace and he sees that so he accepts.

Mike makes it back to his office and finds Rachel. She’s upset that he didn’t quit but he realizes she’s more upset that he can put a diploma on the wall without earning it and get all the benefits. While she’s been working towards an actual diploma.

Harvey goes to the newest partner. He knows he wasn’t asked to be on the case despite Jessica claiming so. He knows the job was demanded so he makes a deal. If he wins this case, his non-competitive contract gets torn up.

Of all people to turn to, Mike chooses Louis. He doesn’t reveal the cause but tells Louis that Harvey no longer even wants to look at him. Louis councils him that Harvey does need him. More than Harvey will ever admit. All Mike has to do is to help Harvey win.

Harvey does need help on the Ava case. He can’t go to Mike so Donna suggest Scotty. Harvey is able to catch Scotty at the airport. At first she rejects his offer until he tells her that she honestly does mean something to him.

Louis loses yet another thing. This time it’s his favorite snack. That’s Nigel’s revenge. He didn’t like his three days out in the wilderness. What Nigel doesn’t know is that Louis will do what he has to in order to win Quarter Master. Even if he does have to do some sucking up. Unfortunately it was a set up. Now that Louis is Quarter Master, he no longer control the associates. Nigel does.

Harvey meets with the infamous Ava. Her company is accused of bribing officials to build an overseas pipeline. Ava is smart and more than Harvey’s match but Harvey is the better lawyer. He’s leaving the office when Mike apprehends him. Mike is trying to help him on the case by giving him information. One problem, Harvey already got the same info from Scotty. Mike knows he failed with that so he comes out and tells Harvey to say whatever he needs to for them to be ok. It won’t work. Harvey is still holding on to what happened. He believes if Mike had come to him with what Jessica did, he could have protected him.

With that relationship appearing to be completely destroyed, Mike goes back to Rachel’s. He’s going to reveal everything. Either she forgives him or they’re over. They’re still in bed the next morning.

Donna finds the files Mike tried to sneak in Harvey’s office. He also hid several more she hasn’t found yet. He knows Scotty helped Harvey but he also knows Harvey is going to need continuous help. He feels that Donna doesn’t get it and she can’t. Because his betrayal benefited himself more than Harvey.

Harvey’s case isn’t going as smoothly as he originally thought. The prosecutor is running for office soon and isn’t unwilling to let Ava slide. No matter that Harvey asked as a personal favor. Using the file provided by Mike, Harvey knows the prosecutor’s biggest contributor is Ava’s business rival.

Mike decides to stop blackmailing Benjamin. He can’t afford to make any more enemies. Only friends. Benjamin helps him to get dirt on Jessica. She can no longer hold his “diploma” over his head. He’s also giving up his bright and shiny office.

Harvey renegotiates his deal. If helps Ava then he wants backing for managing partner. He wants Jessica’s position.