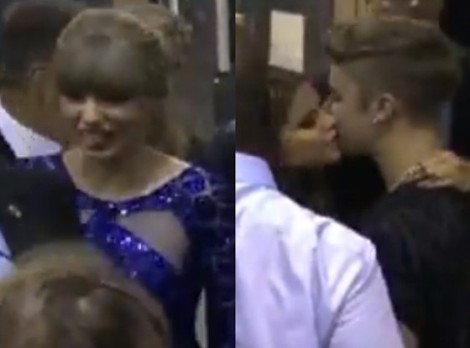 I’m sure you’ve all seen this video, right? It’s a priceless piece of footage and I hope  people can watch it over and over and over again. I’m not the biggest fan of Taylor Swift, but I love her for this. Who out of all of us hasn’t wanted to do that at one point or another? I mean, Justin Bieber was so clearly trying to slip Selena Gomez the tongue, and she was SO embarrassed. And the best part is Taylor’s reaction. She is grossed out and embarrassed for her best friend.

Let’s go through all the ways that Selena Gomez is over Justin Bieber. First, when Justin was called up for his first award of the night, Selena and Taylor completely ignore him and talk to themselves, knowing that the camera is panning to them. Then, when Justin gets called up for his Milestone award, they barely stand and then don’t even clap for him. Selena Gomez, Justin’s supposed ‘girlfriend’, refusing to clap for him!

Not only that, but you can physically see her getting embarrassed when Justin starts getting booed on stage. Like, you can totally see that she’s thinking, ‘Ugh, I can’t believe people know that I’m supposed to be dating THAT.’

Then, there’s the priceless video moment where Justin totally tried to slip Selena the tongue backstage, and Taylor looks so REPULSED by it. Of course, Selena totally backs away and it ends up being a kiss on the cheek that Justin gives her, after which she hightails it out of there.

But wait, the best part hasn’t come yet. When Taylor was giving her press conference after winning her eight awards, someone asks her what she thinks of Justin winning the Milestone award. Her response: “Can I have another question?”

HA. HAHAHAHAHA. Oh Taylor, I think you’ve just bought your way into my good graces again. So much snark in one little sentence.

In the end, it’s pretty obvious that all of Selena’s friends, including Taylor Swift, think that she is way too good for Justin. The problem for Selena is that she totally knows that and is getting embarrassed to be seen with him. The bigger problem is that she still needs him for publicity. Oh, the dilemma.