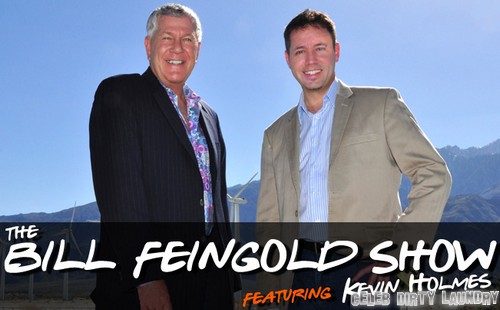 K-News 94.3 Radio’s Bulldog Bill Feingold, along with his trusty sidekick Kevin Holmes seem like the perfect duo to begin your day if you’re in the Palm Springs, CA area. Hollywood Catie was lucky enough to chat with them early this morning and as it turns out we have some things in common. Bulldog might love Andy Cohen more than I do (maybe) and he too is addicted to all things Bravolicious. Needless to say, upon learning that we had to discuss those legendary fights between The Real Housewives of New Jersey’s Giudices and Gorgas and who will get the kids once Joe Giudice is on a slow boat to Italy and Teresa Giudice is wearing the same stripes everyday.

I say that if necessary, Melissa and Joe Gorga will step up and take the kids but man, can you even imagine Melissa spending her days with 7 kids – 6 of them being girls? I’m not sure that her husband makes enough money to afford all of the nannies that she will require just to survive!

We also dished on Lindsay Lohan’s return to real life and Amanda Bynes’ chronic alternate universe. Does Lindsay really want to stay sober this time? Even the judge believes that without mandatory help she is destined to fail. Meanwhile Amanda’s publicist is all sorts of worried because she does not think that the wig wearing, surgery loving nutball is schizophrenic at all. She insists that Amanda smokes 30 blunts a day and pops coke like candy leaving her with drug induced psychotic symptoms. Big difference folks. The anti-psychotic meds won’t work if girlfriend parties like that upon release. Bulldog, Kevin and I all agreed that she needs some serious help and hopefully the court system in California that put her on a psych hold won’t fail her now.

Did you ever notice how Jennifer Aniston is the same character just with a different name in each flick? We all did and while We’re the Millers just premiered all of the talk has been about Jen’s presumed baby bump. Of course her people deny that she’s pregnant but why else would a fitness nut pour herself into that gown knowing she is uber bloated? I think she wanted the talk because she is thrilled to be riding the (early) baby train.

I had an absolute blast dishing the latest Hollywood gossip with Bulldog and Kevin and promised to return but first I need to do some special investigating for Kevin. Rumor has it he won’t sleep well until I find some stuff out about James Franco for him!