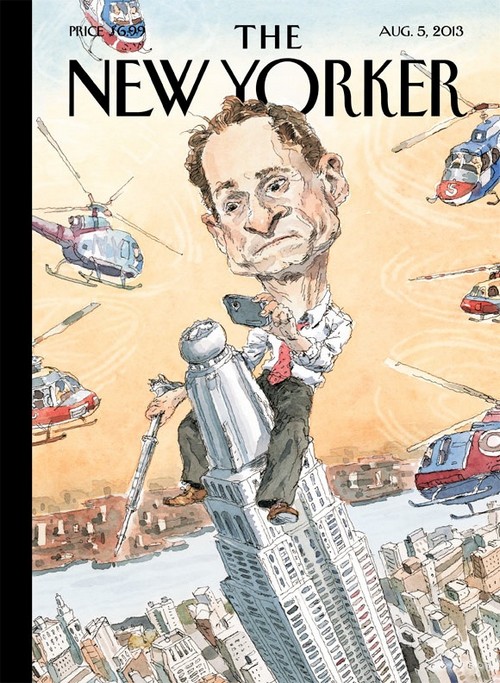 To showcase the extent of what a big joke Anthony Weiner has become in the wake of more sexting scandal details, The New Yorker has spoofed him. Weiner is seen straddling the Empire State Building on the cover of the issue, aimed at making fun of Weiner’s sexting alter-ego, Carlos Danger.

The artist of the cover said, “Free association made me think of the Empire State Building, and then King Kong, the iconic image of him straddling it. And then Weiner sexting, his head tilted and looking a certain way. But all I could think about while working on this piece was, ‘Will Weiner still be in the race by the time it runs?’”

Obviously, everyone knows that Weiner has been using Carlos Danger as his handle while sending explicit texts and pictures to several young women online. Even though it was proven that he was guilty and he had continued to conduct in this behavior even after he was caught, his wife has stood by him. I’m thinking blackmail – financial or emotional – because why else would such a seemingly smart, intelligent, put-together woman stay with such a dog? But you know what, maybe she’s just following in her idol’s footsteps. Huma Abedin, Weiner’s wife, is reportedly very close to Hillary Clinton, and we’ve obviously seen Hillary stand by her man among some pretty serious cheating cases. Maybe she sees a longer political gain from staying with Weiner? I don’t know.

I’m glad that he’s turned into such a joke, though. At least the country’s not actually taking him seriously after this, which was a worry when he was actually leading polls for office. Good riddance, Carlos Danger.