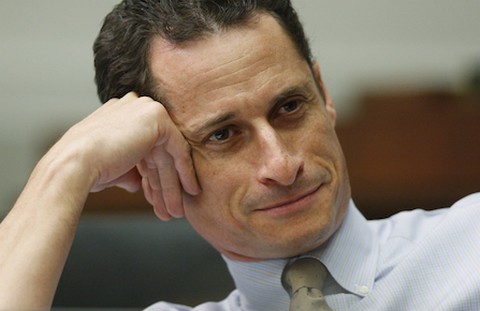 What is wrong with some people? How can anybody actually defend this? Anthony Weiner, moronic idiot and creep that he is, actually admitted that the ‘naked and explicit’ pictures published on The Dirty earlier this week were sent from him.

I guess he was trying to nip the cat in the bud fast, and didn’t want to deal with a denial and then get proven wrong like last time. He said, “I said that other texts and photos were likely to come out, and today they have.” According to Radar, Weiner’s texts were pretty much identical to those he sent to all those girls in 2011, so he obviously has an MO and sticks to it. He pretty much admits it in his statement, saying, “As I have said in the past, these things that I did were wrong and hurtful to my wife and caused us to go through challenges in our marriage that extended past my resignation from Congress. While some things that have been posted today are true and some are not, there is no question that what I did was wrong. This behavior is behind me.”

However, the worst part of it is that Weiner’s wife, Huma Abedin, a longtime adviser to former U.S. Secretary of State Hillary Rodham Clinton, is continuing to stand by him. Can you see the irony here of Huma working for Hillary?  Two ambitious political animals willing to publicly humiliate themselves by staying with and supporting their cheating husbands!

Huma stepped up after his statement and added, “When we faced everything two years ago it took us a very long time to get through it. Our marriage has had its ups and it’s down. It took a lot of work and a whole lot of therapy. It was not an easy choice in any way. But I made the decision it was worth staying in this marriage. This was the decision I made for me, for our son, and for our family.” They recently had their first child, so I would hope that the only reason she’s deciding to stay is for him. Even that doesn’t really make sense, but you can’t really judge what some women are willing to do to keep their families together.

No, what makes me sick is that even after Weiner supposedly sought ‘treatment’ for sex addiction after his sexting scandal in 2011, there are stories about his behavior continuing well into 2012 – which Huma appears to have known about. ‘Sex Addiction’ has become the standard go to line for all cheaters [cough, Tiger Woods, cough], who claim that it’s an ‘addiction’ that they can’t control. Sure, sex addiction is a real thing, but is assholism a problem as well? Because I can guarantee that Weiner is probably just an asshole, not a sex addict.

And knowing what we do about this case, the only reason I can think that Huma’s staying with him is monetary reasons. She was probably offered a large sum of money if she and their son stayed, whereas she would probably be cut off if she decided to leave. Don’t underestimate the extent these politicians will go to when it comes to salvaging their images.