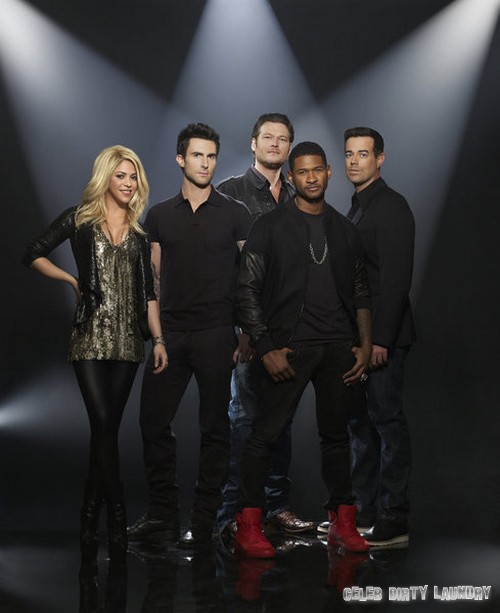 THE VOICE returns to NBC tonight with a whole new episode called. “Live Top 12 Performances.”  On tonight’s show Shakira, Usher, Blake and Adam’s artists all perform live – and your vote could determine who moves on. Did you watch last week’s episodes? We did and we recapped it for you here. NIGHT 1, NIGHT 2, NIGHT 3

On last week’s the Live Playoffs started as the remaining top artists performed live in front of celebrity coaches Adam Levine, Blake Shelton, Shakira and Usher for America’s vote.  By the end of the Playoffs America’s vote  put through the top two artists from each team and the coaches saved one leaving them to move on to the next phase of the competition.

On tonight’s show the top 12 artists perform live in front of coaches Adam Levine, Blake Shelton, Shakira and Usher for America’s vote.  By tomorrow’s show America will vote to eliminate two artists from each team and the remaining 10 will move on to the next phase of the competition.

Tonight’s  The Voice “Live Top 12 Performances”  is going to be an exciting one, which you won’t want to miss. So be sure to tune in for our live coverage of NBC’s The Voice – tonight at 8PM EST!   While you wait for our recap, hit the comments and let us know how excited you are for the new season of The Voice.

RECAP: VEDO is up first tonight from team Usher and this week he is singing “Rock With You” by Michael Jackson. During rehearsals he does very good and Usher reminds him that this is his make or break moment.

Shakira really thought the work with Usher paid off, he seems like a nice guy who leaves his heart on stage when he performs. Blake thinks the dancing didn’t affect his performance, it was awesome. Usher knows that a lot of hard work goes into singing and dancing together and VEDO did it tonight.

Holly Tucker from team Blake wants to be known as a country artist and tonight she is singing “Broken Wing” by Martina McBride.

Usher has a question, does Holly think it is a coincidence that she is meant to do this, she says no. Then Usher says that anyone who doesn’t think she is meant to do this is an idiot. Shakira thinks it was gosh dang awesome. Adam thinks she is great and amazing, the emotion and intention is something that he was waiting for and he’s happy she did it with this passionate song. Blake thinks this is the best that they have heard her so far. Blake thinks somewhere Martina McBride is going OMG because Holly sang this so well.

Team Shakira’s Garrett Gardner is next, he’s 17 and he was saved by Shakira. The song Garrett is singing tonight is “I Want It That Way” by The Backstreet Boys and Garrett is putting his on spin on it.

Adam was thrown by this song, it wasn’t his favorite. Blake thinks sometimes you need to throw an artist into left field to see what he can do, he thought it was pretty good. Usher says that Garrett has to remember that constructive criticism only makes you better. Shakira thinks Garrett is very charismatic and thought the song was really badass.

It’t the passionate music student, Sarah Simmons from Team Adam. Sarah is singing a song that Adam loves “The Story” By Brandi Carlile.

Blake thanks Sarah for showing the extremes of her voice and this was one of his all time favorite songs. Shakira doesn’t know this song, but she felt it suited Sarah’s voice. Adam thinks the refined range of voice is so special and she is one of the best singers they have ever had.

The Swon Brothers from team Blake are next and they are country boys. The boys asked Blake if they could sing a George Jones song since he recently passed, “Who Is Going To Fill Their Shoes”.

Usher thinks they showed diversity, what an incredible tribute to George Jones. Adam thought it was great, it was a beautiful rendition of that song. Blake thinks George Jones was the king of country music and he wants us to know that it was the Swon Brothers idea to sing this song, he thinks it is their break out moment.

Sasha Allen from team Shakira is next and she singing “Alone” by Heart because Shakira thinks she can pick up the high notes.

Adam thinks he should never have let go of her. Usher thinks it was theatrical, he kind of felt she took them to church. Shakira thinks Sasha has one of the best voices she has ever heard, she thought it was heartfelt and the version was fierce and passionate. Shakira says that if America doesn’t vote for her, she is going to write a song called “My Sasha”.

Josiah Hawley from team Usher is next and has a jazz influence from his father who is a jazz pianist. Josiah is singing “The Man That Can’t Be Moved”  by The Script and he is doing it with an acoustic feel.

Adam thinks Josiah finally found a place for his voice, this was his sweet spot and the best so far. Blake thinks the combination of him and Usher makes sense now, this was his very favorite performance. Usher encourages his team to trust their own instincts and this is the way he wanted to with the acoustic feel and it was great. Usher thanks Adam for not taking Josiah when he sang his song, it was Usher’s chance to work on a young Adam.

Danielle Bradberry from team Blake wants to be a country pop artist and she thinks she can do it. Before The Voice she was a regular teenager and now she can’t believe she is in the top 12. Blake has chosen her song this week, “Wasted” by Carrie Underwood.

Shakira believes that she never detected an ounce of nerves from Danielle, it so impressive. Adam thinks Danielle is the one to beat and he whole heartily believes it, what an incredible job. Blake wants people to know that Danielle is exactly who they think she is, a normal all American girl.

Judith Hill from Team Adam is a soul singer and she will be singing “You’ve Got A Friend” by Carole King. Judith needs this show because it is a tough business for aspiring artists.

Blake thought that was beautiful and powerful, what they come to expect from Judith every week. Usher thinks Judith is complete control of her destiny and he is happy that he got to see her performance tonight. Adam says that there are a lot of great voices on the show, but getting up there and playing your piano takes so much talent and he believes that she is the most talented in the competition in it’s rawest form.

Michelle Chamuel is next from team Usher and he gave her the song “Call Your Girlfriend” by Robyn. Music is Michelle’s best friend, but now she feel like she is on her own to get over her stage fright.

Shakira thought it was really cool, she loves that Michelle sang and danced at the same time. Adam thinks Michelle is one of his favorite because she is always passionate. Usher adores Michelle and thinks she is incredible, he loves that she gives it her all every single time.

Kris Thomas from team Shakira is next and he is so grateful to The Voice because he was just about to join the Navy. Kris is singing “I’ll Be There” by The Jackson Five.

Adam thinks this song was a task that Kris rose to, it was a tough thing to do. Blake thinks the song pushed Kris to the extreme and always proves himself, it was incredible. Usher thinks there are constructive things that he could say, but the point is no risk no reward. Shakira thinks that Kris sang with so much sweetness and sincerity, she is so proud of him.

Amber Carrington from team Adam is singing “I’m Going To Love You Through It” by Martina McBride because she lost her mom from cancer at the age of 38 and she was always pushing Amber to follow her dreams.

Blake thinks that Amber did Martina proud and Nashville proud even though she is not on his team. Usher can’t believe that when he thinks she is giving it her all, she gives more – she is an incredible vocalist and will have an incredible career whether she wins or not. Shakira thinks it was a smart move for Amber to go back to her roots. Adam thinks Amber just continues to impress him and it has to be that way for the rest of America. Adam doesn’t think that he could have sang that song if it was close to home like it was for Amber.