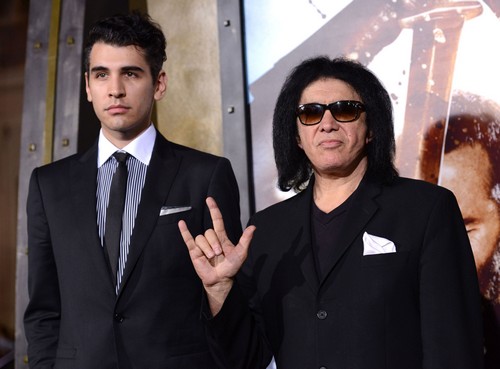 Amber Rose was spotted on a dating hook-up with Nick Simmons – she isn’t wasting any time rebounding from her divorce from Wiz Khalifa, and Nick Cannon split, is she? To be fair, all the rumors point to Amber cheating on Wiz, not the other way around. We reported extensively on Amber’s ‘business arrangement‘ with Nick Cannon, which was supposedly going to help with her music career. Except, surprise – a week after the deal was signed and Amber started hanging out with Nick, she and Wiz Khalifa are getting divorced. Coincidence? I think not.

However, whether due to Mariah Carey’s pressure or Nick trying to protect his reputation, Amber has moved on. A video shows Amber Rose dancing with her new boyfriend, Nick Simmons, at a party in Los Angeles. Coincidentally, Nick Simmons also happens to be the son of Gene Simmons. Leave it to Amber to try to leverage her connections even when it comes to her hookups and boyfriends. It seems the duo have been hooking up and/or dating for the past few days, although I’m not sure how recent the relationship is. It’s very possible that Amber was hooking up with both Nick Cannon and Nick Simmons on the side – it seems like she’s got a thing for guys named ‘Nick’, huh?

It’s also possible that Amber Rose and Wiz Khalifa were mutually cheating on each other, which also wouldn’t be a huge shocker. Their marriage clearly wasn’t the most stable, even though they had their first child a few months ago. And now that they’re getting divorced, they’re not even attempting to hide their other relationships.

What do you guys think about Amber moving on so quickly? Isn’t she making it obvious that she never gave a crap about Wiz or his feelings, or is this her way of getting revenge on him?