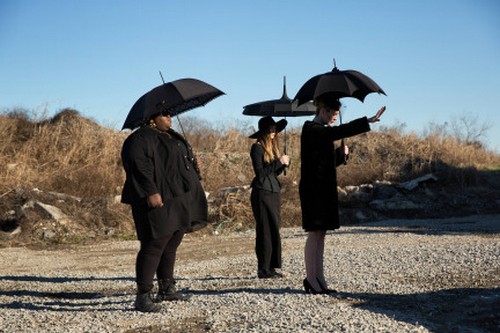 Here is our final review of  Season 3 of AMERICAN HORROR STORY.  This is what we have been waiting for. After a season of watching the girls become more powerful and sure of themselves tonight we find out if the new Supreme is going to be Misty, Zoe, Queenie, or Madison.

The final episode of the season opens with Stevie Nicks, she sings a song about the Seven Wonders. It’s a really beautiful song. Each of the girls is shown throughout the song. Misty is twirling in the greenhouse. Zoe is reading a spell that causes her to levitate the bed. Madison is relaxing in a tub she lights candles around it with a wave of her hand. In the greenhouse Misty is growing a new plant with her mind. Queenie is in the floor in her room and she has lit a candle in honor of Nan. They all them come downstairs dressed in black. They meet Stevie at the bottom she tells them good luck and the door shuts behind her as she walks out.

Myrtle has gone all out with the last supper she made for the girls there is caviar and champagne. Cordelia says that it is the old Supremes job to suss out the new one but Fiona not only failed at that but she also tried to kill them. Cordelia tells them for that reason they are doing something they have never done and are giving all four of them the chance to prove that they are the next Supreme. Cordelia tells them to kick ass tomorrow.

Let the games begin. Myrtle tells him that the task are usually done from easiest to hardest but since they are already breaking tradition she is going to start with her personal favorite, telekinesis. Kyle comes forward and lights four candles one in front of each of the girls. Misty goes first she uses her mind and the candle come to her, Queenie goes next and nails it, Madison does to, Zoe pulls it off as well.

Next is Concilium/ Mind control, Misty is trying to control Queenie. Queenie tells the flower child she can try all she wants she is the only that controls her mind. No sooner are the words out of her mouth than Misty has Queenie slapping herself. Queenie lets out a oh shit, Misty slaps her a couple more times in the name of fun. Queenie’s turn and she makes Misty pull her hair. Madison comes to bat she brings Kyle into it because that’s what petty girls do and she makes him kiss her and then lick her shoe. Zoe is having none of that and makes him come to her and they kiss, Madison gets angrier and causes Kyle to start choking Zoe. Cordelia waves her hand and Kyle goes flying, she informs the girls that she’s had enough and they need to move on. Madison ask Zoe if she is having fun, Zoe tells her it’s a real party. Myrtle takes a huge drag off her cigarette.

Stage three of this party is taking a field trip to Papa Legba’s turf. Myrtle tells them getting to hell is a breeze for girls with their talents, it’s the getting back that presents the challenge, if their soul doesn’t return to their body by sun up they will die. On that cheerful note Myrtle turns over a big hourglass and tells them to begin. They all four lay there with eyes closed and chant. Queenie is back serving chicken, girls got this she is back in a flash. Madison springs up next, she says it was horrible she was stuck on a television network in a live version of The Sound of Music. Zoe comes back and with tears in her eyes explains that her hell was Kyle and her breaking up over and over in a loop and he kept saying he didn’t love her. I guess in this form of hell it’s,either your biggest fear or your insecurities that are the punishments. Zoe cries for a minute and then ask if they are all back. Misty is still down for the count. Misty’s hell is a biology class where instead of cutting the frog she brings it back to life. The biology teacher makes her kill it and she cries, this happens in a loop as well. Kyle makes a drink and brings it to Myrtle. Cordelia tells them Misty is stuck and they need to help her, Myrtle says they can’t she has to get back on her own. Cordelia holds her and talks to her trying to bring her back, the hourglass runs out and Misty is ashes.

Cordelia wants to take a minute to remember Misty, Madison wants to get on with it, Queenie tells Madison she is a stone cold bitch! Zoe wants to resume the test as well. Myrtle tells them transmutation is next. At first it’s a game of tag, the girls are having a blast and they take it outside. It’s all fun and games till someone winds up impaled on a gate,that someone being Zoe. Queenie tries to bring her back like she did Misty but it won’t work. Cordelia tells Queenie to take Kyle in the house. Cordelia ask Madison if she can bring her back, Madison knows that she can, Cordelia tells her to do it, Madison ask if that will make her the new Supreme. Madison kills a fly and then brings it back, to prove she can do it. Myrtle says Madison doesn’t deserve to be the Supreme. Madison says that has nothing to do with it and they either crown her or they can kiss her ass. Madison stomps out leaving Myrtle and Cordelia with Zoe’s body.

Cordelia thinks she is to blame that is her fault the coven is in ruin. Myrtle tells her she did what she could. Cordelia doesn’t think it was enough. Cordelia and Myrtle are both disappointed the one left standing is Madison.

Kyle is in the greenhouse with Zoe, holding her hand and crying.

Myrtle thinks that Cordelia could be the next Supreme seeing as how her mom was the last one. Myrtle tells her to try and perform the Seven Wonders. Cordelia is now in the game with Madison and Queenie. Madison tells her she knows what she is doing she isn’t stupid, Queenie begs to differ and tells Madison she is in fact stupid. Cordelia kicks some serious Madison ass,mshe lights a candle and the the fireplace, makes Queenie do some exercise and lifts the piano, next she goes to hell. The hourglass is almost empty but she gets back, her hell was getting bitch slapped repeatedly by her mother, she moves herself over by the door. Cordelia like Madison and Queenie now has five of the seven in her pocket.

Six is divination, Madison is all in,again. Myrtle hides items belonging to former Supremes, she tells Cordelia to find one of the items she does it. Madison is up next she can’t do it, gets pissed and throws a fit. Myrtle tells her she fails so Madison makes up places for them to look, but nothing is where she says it will be. Madison tells them she is going back to Hollywood and telling TMZ all about the coven.

Madison is upstairs packing her suitcase when Kyle comes in. Madison ask him what he wants. Kyle grabs her by the throat, ask her why she let Zoe die then throws her on the bed and starts choking her. Cordelia is trying to bring Zoe back. Kyle is still asking Madison why, she tells him it’s because she loves him. Kyle tells her she isn’t that good of a actress. I’ve been saying that all season. Kyle puts his hands back around her neck. Madison dies, Zoe lives, and Cordelia hits the floor.

Kyle is looking at Madison’s dead body when Spalding shows up and touches her face with a doll hand. Spalding tells Kyle she had already started packing which is helpful because no one will ask where she is and they can bury the body, trunk for Madison it is. Kyle ask him who in the hell he is, Spalding tells him he is the help.

Cordelia picks herself up off the floor of the greenhouse and realizes her sight is back. She is the next Supreme.

Cordelia is doing a interview and explains that they aren’t a cult but rather a group of women who are born with certain abilities that they call powers. It isn’t a choice it’s who they are. Cordelia tells all the girls who might think they are witches to call, send a email, or come to New Orleans.

Myrtle walks to the stake, gets tied to it and is covered in gasoline. Myrtle tells Cordelia she has never been more proud of her. Cordelia ask her if she has any last words. Myrtle has just one ” Balenciaga.” Myrtle our fashionista how I’ll miss you. Cordelia sets her ablaze and walks away.

There are girls as far as the eye can see lined up outside the school. Queenie and Zoe are looking out the window at them. Cordelia comes in and tells them they will be her right hands as well as her council. They agree and Zoe ask if they should open the doors. Cordelia tells her not yet and to wait in the room she has something else to take care of first.

Cordelia goes downstairs and sees her mother smoking in a chair. Cordelia tells her it isn’t possible she saw her die. Fiona tells her to think again. Cordelia closes her eyes and has a vision that shows her mom tricking the Axeman into going along with a story that Fiona is dead so that Cordelia will have no choice but to find the new Supreme and then Fiona can kill her. Clever girl that Fiona. She even plants a memory in his head that her daughter will see. Cordelia turns on a light and we see Fiona is dying. Fiona wants Cordelia to kill her but she won’t. Fiona tells Cordelia the power she has was once hers. Cordelia tells Fiona she is scared she hugs her. Cordelia tells her no one can help her and the only way out is through so let it all in and then let it all go. Fiona hugs Cordelia and then dies in her arms.

Fiona is laying in a bed coughing, she gets up and looks around, she puts on her shoes. The Axeman comes in with a catfish for her. Fiona is her own personal hell. Papa Legba is laughing behind her.

Cordelia, Zoe , and Queenie walk over to the doors and open them, all the girls come in.
One of the girls ask what a Supreme is. Queenie tells her she is looking at her. Cordelia smiles.

This show keeps getting better and better can’t wait to see what next season holds.

THE END, See you Next Season!!