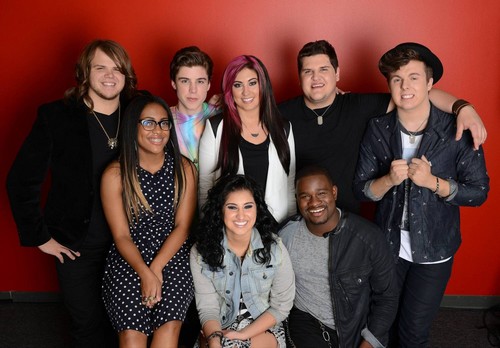 It’s another exciting night for AMERICAN IDOL on FOX. Season 13 is really heating up and the remaining 8 singers  perform their their first audition song.

On last week’s performance show the Top Nine – C.J. Harris, Jena Irene, Caleb Johnson, Jessica Meuse, Alex Preston, Dexter Roberts, Majesty Rose, Malaya Watson and Sam Woolf – will perform on the “(I’m With The) BAND!”– themed performance show. The IDOL hopefuls will act as the lead singer for Rickey Minor and his band, performing their favorite songs.  Did you happen to catch the last episode and see which cast member was sent home? If not we recapped who got the boot and it’s all right here for you.

Judges Comments: Keith – “That was a great start to the show and it was great to hear the song again.  I love the ferocity, but one thing I wish you would keep working on getting the rest of you to move and get the energy.  You got the shoulder going on but your legs are dead still.  I feel like one thing is just not quite there yet.  Did you borrow Henry’s shoes?  Because sometimes the shoes will throw you.”  Jennifer – “When an artist sings their own material, this was a whole different experience for me, I loved it.  I can hear your album and see the kinds of things you are going to ding about.  I loved it, I love the whole thing.”  Harry – “It reminded me of like Cher in the 70’s where you stand just on that cylinder singing.  I disagree with Keith, I think if you can deliver it you won’t have to move at all.  At the very end there was a very short musical interlude, it felt like dead space.  I thought that was a great way to open the show.  I loved that song.

Judges Comments: Jennifer – “you know it was better than the first time you did it, you felt it, we felt it. There is something about you that just touches my heart, I’m rooting for you.  That was so soulful and full of heart.  You touch people, you really do.”  Harry – “You are special enough to be here, and your voice is special enough to be here.  I can tell that you have been working on the things we have been telling you to, like pitch.  You’re getting smart and you are doing the right thing by working on that.  You’re doing great, really nice job.”  Keith – “That’s the reason you got here was that song, and you really reigned it in way better than you did at auditions in Salt Lake City.  Good job buddy.”

Judges Comments: Harry – “I think the wrong word is being throw around about you, confidence.  It’s not confidence, it’s about connection.  When you hear these young people scream, you need to acknowledge them.  Pick someone in the audience and smile about them.  We love that you are shy and sweet, but connect with them, it will change your world I promise you.”  Keith – “The great thing is you are getting better every week.  You’ve been working on this I can tell, you are getting looser in between the lines.  Let it be soulful.  I’m really happy with where you are headed.”  Jennifer – “With that performance, just like we saw you the very first time, America got a glimpse of the magic of Sam Woolf.  That’s what we saw the first day, and that’s what you saw just now.”

Judges Comments: Keith – “Baby, the great things about the show is watching the growth from week to week.  You’ve had this voice from day one, you have had to be with it.  And tonight you had such great control.  Fantastic Malaya.” Jennifer – “I think of you with the braids and the sweatpants, and it’s like you are blossoming into a beautiful girl.  You are going to run away with this competition.”  Harry – “You are doing everything right, you’re entertaining, you’re performing, you’re doing all of those things right.  I’m going to give you the same advice I gave you last week, you have access to so many music coaches, this incredible band, and Ricky.  Get them to teach you notes, there’s 12 notes, learn them all.  You can get there, you can do it.  I wouldn’t waste my time telling you if I didn’t think you could do it.  And keep doing what you have been doing, that was great.”

Judges Comments: Jennifer – “Dexter, I guess you showed us, we kept saying try something different, and you know what you did.  I heard so many little nuances in your voice that I have never heard before.  I wanna give a shout out to Alison for backing you up, that’s my girl.”  Harry – “I first want to compliment you for complimenting the musicians behind you, that’s very professional.  You really needed this this week.  You did a great job, and you have good ears by the way.” Keith – “What I want to say quickly to you is pay less attention to the sound of your voice right now.  I think you need to focus on the lyrics and communicate the lyrics, because you have got everything else.”

Jena Irene is singing “Rolling In The Deep” by Adele. [VIDEO HERE]

Judges Comments: Harry – “What I originally thought may have been a speech impediment has actually turned into a really cool idiosyncrasy.  I think you did a great job, it’s getting tougher.”  Keith – “What I love so much about that performance is you took that song that we all know so well and you made it your own.  Some people may hate that, but personally I thought it was bold and I loved every second of it.”  Jennifer – “Jena my advice to you is to come out here every week and blow every one away, and win this whole thing.  You gotta come out here every week and destroy everyone else’s performances, and I’m saying this to you because I know you can do it.”

Judges Comments: Keith – “Caleb, you just you deliever every week.  You are a blues warrior, a soul conqueror, and a rock and roll Viking.”  Jennifer – “When I watch you it’s like you have been waiting for this moment your whole life, and you kill it and you conquer it every time.”  Harry – “Here’s what we know about you, your stakes are so firmly planted in this competition.  I would love if you would do something not so loud.  Freddy Mercury, Steve Perry, all the great rockers there were times when they sang softly.  We’ve heard you belt it over ten times now.  Great job tonight.”

Alex Preston is singing “Fairytales,” a song he wrote himself. [VIDEO HERE]

Judges Comments: Jennifer – “You stayed true to yourself since the very beginning.  The things we loves about you in the beginning are the things we loved about you now.  I even noticed the new move you do.” Harry – “I enjoyed it Alex and I liked the fact that you did an original.  I like the original.  Yeah I liked that.”   Keith – “you know whats cool too is you did an original song and I looked over and half of these guys were singing along with you.  That’s a good sign!”