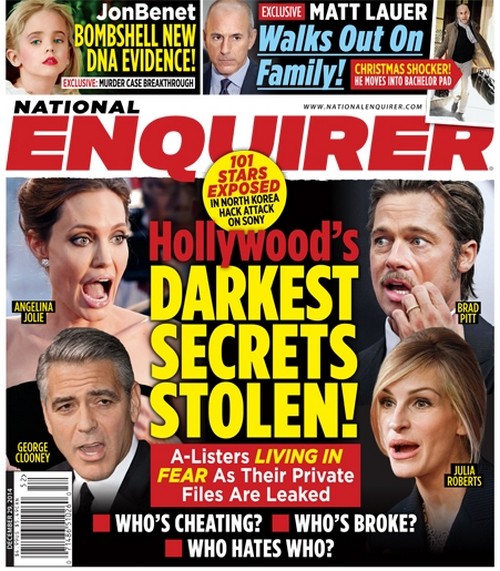 Angelina Jolie and Brad Pitt are featured on the cover of the newest issue of “National Enquirer” and we are about to learn about their cheating and sexual fantasies. Apparently the latest Sony hacks have left Hollywood’s A-listers shaking in their shoes and Angelina Jolie and Brad Pitt are terrified! Already we’ve learned that Dame Jolie is considered an egomaniacal untalented spoiled brat but it gets worse!

We have all heard rumors about how much of a freak Angie is in the sack, and apparently these latest hacks have gotten the dirty details on what Angie likes and doesn’t like to do with Brad and others in the bedroom. In addition to all of that drama, there is reportedly some information that has been leaked about who has been cheating on whom in Tinseltown.

We’ve heard rumors that Angelina was hooking up with another woman during her relationship with Brad Pitt, so this doesn’t shock us one bit. What is Hollywood more afraid of? Their sex secrets will be spilled all over the tabloids or their medical information is being leaked to the masses?

A source revealed, “Some of the biggest names in the movie business are worried sick that their most closely guarded secrets will come out.”

A group called “Guardians Of Peace” is an international group that has leaked a lot of information directly from Sony head honchos. The FBI is currently in the middle of an investigation, but apparently cannot stop the amount of information that is being fed to the media on a daily basis. Sources say that North Korea hackers could be responsible for the hacks because of Sony’s release of the movie “The Interview” which depicts the assassination attempt of their leader Kim Jong-Un.

A source in Hollywood said, “There’s fear that the emails could cover really personal dark secrets like which stars are broke or which celebs are cheating or who has sexual fantasies.”

There are said to be hundreds of thousands of sensitive emails that are being passed around – some are said to be a decade old. The magazine reports that the following stars are affected by the emails:

That is a super long list… What will the Sony hacks reveal about your favorite celebrity?