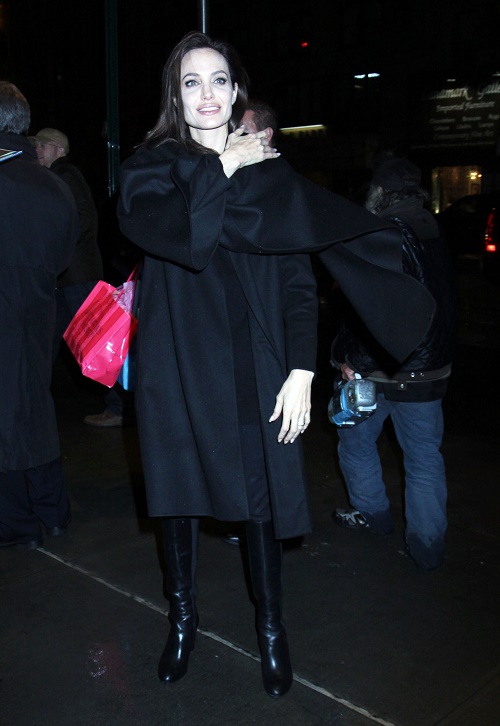 Nobody expected Angelina Jolie to be taking the Sony hacking scandal very well, since she’s one of the most prominently featured celebrities in the leaked emails. She’s been called all manner of things [mostly by Scott Rudin], including a ‘minimally talented spoiled brat’. Of course, Angelina Jolie is not one to let this sort of thing fly by without any form of retaliation, but she’s going to wait for her moment. She’s not going to pounce now, when her position in Hollywood has never been weaker – she’s become the public face of the Sony email leaks, she’s got chicken pox, and Unbroken‘s buzz [both commercial and critical] has been fading away over the past few weeks. Right now, Scott Rudin will come out looking like the winner if she does anything.

However, the National Enquirer is taking it one step further and claiming that the Sony hacking scandal has been causing mental health issues for Angelina Jolie. The Enquirer’s source explains, “For whatever reason, Angie’s gone into hiding. I know she’s fearful other emails could expose her past drug binges, wild rages and breakdowns. If this happens, it will leave husband Brad Pitt humiliated. There could also be stuff about Angie’s jealousy toward other stars and her bitter rivalries! No one knows what’s going to come out next!”

Oh my god. Can you imagine if there’s a leaked email containing Angelina Jolie’s rants against Jennifer Aniston, for example? You know that exists somewhere in cyber space, and now I almost want the hackers to continue, if only to read that email.

Anyway, the Enquirer’s source adds that Angelina’s delicate mental balance has been upset by this crazy Sony mess, adding, “As stressed as she is, I fear this mess could once again lead Angie to be haunted by suicidal thoughts. Angie felt she’d worked so hard to earn credibility after her wild-child past.”

Yes, by getting married and having a bunch of babies and doing humanitarian work. I don’t think Angelina’s mental issues are anything to worry about right now, but I do think that she’s planning revenge on Scott Rudin. Don’t you agree?