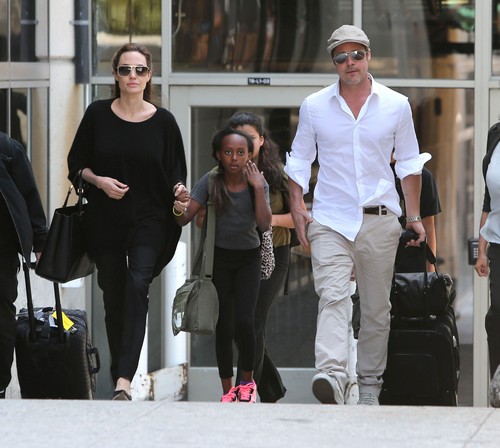 If you want to work for Angelina Jolie and Brad Pitt you have to be willing to sign a 50 page contract that is intended to keep their private lives out of the press. Occasionally even that kind of paperwork doesn’t prevent the truth from leaking out. We have heard about what a slob kabob Brad is and how their uber-expensive homes are actually disastrously dirty. According to the June 30th print edition of Life & Style magazine Angie really doesn’t want people to hear very much about her temper.

Sources say that when Brad refuses to agree with her on an issue that Angie feels is important she gets physical. Brad has been shoved and has had things thrown at him in front of the nannies. She also has torn into Brad, quite literally, ripping his shirt. Hearing that Angie is prone to violent outbursts might help to explain her rowdy and sometimes volatile kids. We have heard for years that they are such a rough crew that all 6 kids each has their own nanny out of necessity. No wonder there have been behavioral problems with the kids, they are simply following moms lead!

Brad and Angie work so hard to keep things under wraps and there has always seemed something a little off about them to me. Do you think that they are a happy couple juggling a big family or do you think that it is a whole lot messier behind the scenes than we even realize? Do you think that Angie’s violent outbursts are worse than even this story indicates? They’ve been engaged for a long while now, do you think that Brad and Angie will ever actually swap vows or will they instead split before a wedding ever happens? Tell us your thoughts in the comments below!