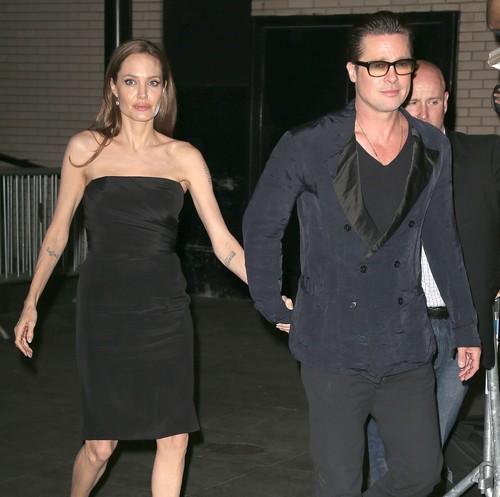 Brad Pitt and Angelina Jolie can rest easy knowing that their deep and dark secrets are now safely locked away. According to reports, a Los Angeles judge dismissed a federal lawsuit filed against News of the World and the Sun by Angelina’s stunt double, Eunice Huthart, for hacking and intercepting her phone messages. Clearly, the tabloids were trying to get something juicy on Angelina, but whatever they found will never go public.

Initially, Eunice’s allegations had revealed that she knew the details of how Angelina and Brad were going around behind Jennifer Aniston‘s back, checking into hotels as a married couple and generally carrying on a secret affair. This goes against Brad’s claims that he never hooked up with Angelina while he and Jennifer were still married
, and if it was ever confirmed by the tabloids, it would have been an explosive scandal – well, more of an explosive scandal than it already was.

However, the judge dismissed the suit, stating that it should have been filed in the United Kingdom, and not in the US, where the crime did not take place. And considering that Eunice was Angelina’s stunt double during the filming of Mr. & Mrs. Smith, it could have potentially lead to a lot of behind-the-scenes secrets, especially concerning Angelina’s and Brad’s flirtation and possibly illicit romance.

Granted, Eunice can easily go and file in England, and News of the Corps’ lawyers have already stated that they wouldn’t object to such a filing. So even if the records have been temporarily sealed, it’s very possible that all of this gets brought up again in the future. So maybe Angelina’s and Brad’s sordid history isn’t as secretly hidden away as we thought, huh?

Of course, it would be sweet vindication for Jennifer Aniston if these rumors ever come to light. I think she’s always held herself back from saying anything too horrible about Brad and Angelina, but you know she still hates both of them for what they did to her – Brad for leaving her, and Angelina for ‘stealing’ him. Technically speaking, Brad’s the one in the wrong here – he’s the one who may have cheated on Jennifer and he’s the one who left her. But if he’s not telling the truth about not cheating on Jennifer – and the whole world gets proof on that – then we can expect Jennifer to milk that for all its worth in the media.