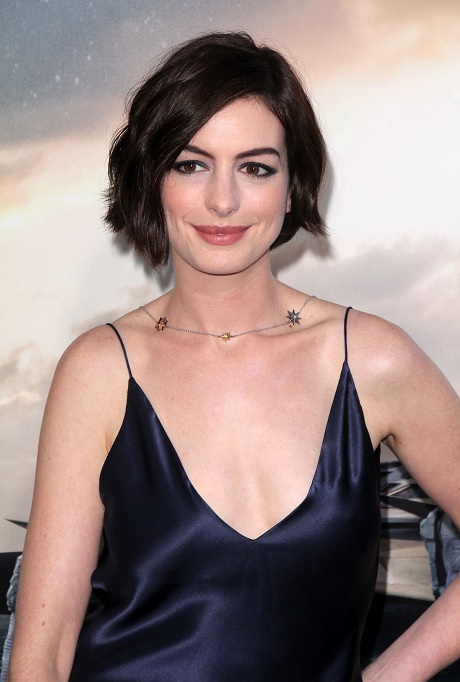 Anne was participating in the Interstellar junket this week, and she just gave an enormous amount of ammunition to her long line of haters. According to Argentine journalist Alexis Puig [who took to Twitter to air his complaints], every single one of the film’s stars shook his hand – except for Anne Hathaway.

He tweeted, “Anne Hathaway didn’t shake my hand because she was she was afraid of ebola #I’mAThirdWorldJournalist.” He also added, “Christopher Nolan, Matthew McConaughey and Jessica Chastain were genial in the interviews (and none of them denied me their hands). Take that, Anne!”

Seriously, what the heck? It’s possible that Anne didn’t shake the hands of EVERY journalist in the junket, but if she singled out this poor guy because he was from Argentina… well, let’s just say that I hope more people call her out on this. First of all, Argentina is currently Ebola-free, so Anne is not even educating herself on the damn disease. Secondly, health experts have weighed in on Ebola over and over again, and have pretty much said that the entire community is blowing this thing out of proportion.

The chances of most of us contracting Ebola is almost zero percent, especially since it’s extremely difficult to spread. So, again, Anne is being an ignorant fool in this situation, and/or insulting some poor journo because he was from a third world country. I doubt she refused to shake hands with American journalists who she was being chummy with, so this is just hypocrisy and rude behavior at its worst.

UPDATE: Anne has denied allegations that she was afraid of Ebola and hence refused to shake this journo’s hand, claiming that she had a cold and wasn’t shaking anyone’s hand. Still seems like damage control to me, but any excuse is better than fear of contracting Ebola.