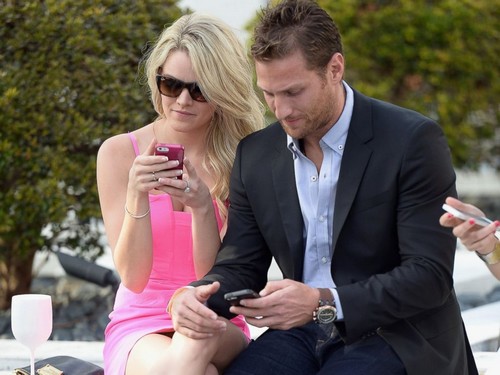 The Bachelor Juan Pablo Galavis and Nikki Ferrell are still dating, and trying desperately to cling to their fame. Juan Pablo stopped by Access Hollywood earlier this week, and in a transparent attempt to stir up some gossip, told the outlet that he and Nikki were only together thanks to Couple’s Therapy.

Yeah, you know the reality show where celebrity couples go on TV and pretend that they’re having relationship issues? The very same.

Juan Pablo told Access, “We are so glad we did [Couples Therapy]. I don’t think we’d be together right now if we hadn’t done it.” In other words, Juan Pablo wants you to think that he and Nikki were about to break up, but the magic of Couple’s Therapy saved their [fake] relationship. He’s clearly trying to get audiences to tune in and watch the show, but he doesn’t seem to have gotten the memo that the public is over him and his girlfriend.

Keep in mind, this is the same guy that refused to tell his future fiance that he loved her – on TV! His douche behavior has become stuff of legend, and that’s saying something considering how horrible reality stars tend to be. He and Nikki can continue playing the fame game, but even if they go on Dancing with the Stars and Dr. Phil and every manner of reality show available to them, audience interest will continue to wane. Unfortunately for them, that’s just how it works for former Bachelor and Bachelorette stars, at least until their ensuing wedding and subsequent divorce. So basically, expect to see Juan Pablo and Nikki Ferrell walk down the aisle fairly soon, and then get divorced just as quickly for publicity.