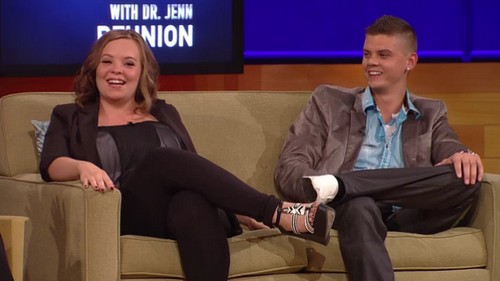 Tonight on VH1 is a reunion episode of COUPLES THERAPY called, “Reunion Part 2.” On tonight’s show it’s part two of the reunion where they will continue the status report on couples from past seasons of the series. Included: Doug Hutchison and Courtney Stodden.

On the first part of the reunion, former participants of Couples Therapy returned to discuss how the show’s impacted their lives and to update people on how their relationship is currently doing. Did you watch the last episode? We recapped it all right here for you.

On tonight’s show it’ll be a continuation of the first part of the reunion where former participants of Couples Therapy return to discuss how the show’s impacted their lives and to update people on how their relationship is currently doing.

RECAP: Tonight’s Couple’s Therapy Reunion kicks off with a screaming match on stage, Dr. Jenn freaks out on Tiny and tells her that there is no telling people to “shut the f—k up” on her stage. Tiny agrees to tone it down out of respect for Dr. Jenn.

Next Jenn shares a clip of Courtney Stodden, Doug, Nik, and Shayne feuding in the Couple’s Therapy house. The two couples bickered over Courtney’s inappropriate clothing, and she was constantly throwing herself at Nik and flirting with him. In the clip Courtney teases Nik in the kitchen and asks him where she should squirt something. After the clip Doug tries to blame her flirting on the editing, but Courtney interrupts and admits that she came on to him multiple times and apologizes profusely. Despite Courtney’s apology, Nik says he can’t condone their relationship, and he still thinks that Doug is a pedophile.

Up next Jenn shares a clip of Tyler and Caitlin’s journey on Couple’s Therapy. In the clip Tyler reveals to Caitlin that he isn’t ready to marry her even though their wedding is just five months away. Jenn commends them after the clip for how much courage it took for them to put the wedding off since it was planned for it to air on a major network. Tyler announces that the wedding is back on and they have chosen a date for next year. Caitlin adds that she is pregnant again, and they find out in eight days whether it is a boy or girl. Caitlin and Tyler hope that their new baby will have a relationship with their daughter Carly, who they gave up for adoption.

Dr. Jenn interrupts and says that at the end of the day you need to be comfortable with what you’ve done, and Farrah’s problem is that she isn’t comfortable with some of the things she has done. Farrah breaks down in tears and says that she works her ass off so that Sophia won’t have to do any of the things she has done for money.

Before the Couples Therapy Reunion comes to a close Dr. Jenn reveals that they have just finished shooting Season 5 of Couples Therapy and it might just be the most intense season yet.