Big Brother 16: 5 Big Brother All Stars I Pray Not to See This Season! 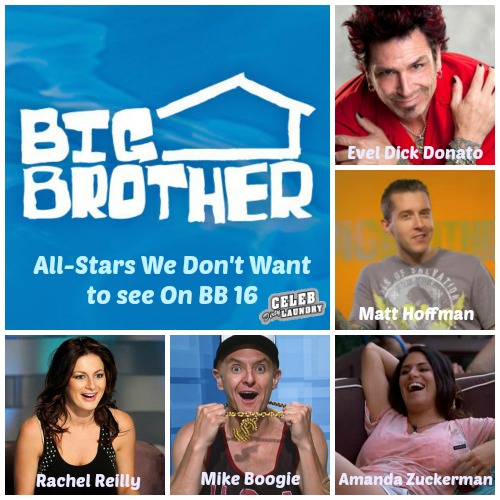 With Big Brother 16 firmly underway, and no All Stars in sight, I can breathe a bit easier about the season. That said, the season is supposed to have surprises all summer long so we are not out of the woods yet. Big Brother is known for surprising us and entering former houseguests, often labeled All Stars, into the home. While Big Brother 16 has not yet hinted at such, there are certain guests that I would hate to see show up. Like most Big Brother fans, we all have our favorites. These are the five that would not be on my list:

Mike Boogie –  Boogie has always rubbed me the wrong way and I think it is because he never committed one way or the other. On the one hand, he came across as brash and evil and on the other he could be a nice guy and fairly likable. This wishy washy attitude made for a very confusing character on television and left me feeling like he was simply riding the fence most of the time. Boogie would bring little to the table if he showed up yet again.

Rachel Reilly –  My God Rachel. Rachel was a voracious game player and few could argue that she did what she had to do to win. That said, I can’t handle another season of her laughter. I love her game play, I love her tenaciousness, but I can’t stand her laugh. It drives me insane like fingernails on a chalkboard. Reilly rocks otherwise, but I really don’t care to see her show up this season.

Evel Dick Donato –  Evel Dick simply is way too arrogant to enjoy. I like a character that is strong and believes in themselves, but Dick was full of himself at a whole new level. I have rarely seen characters that I liked absolutely nothing about, but Donato was one of them.

Amanda Zuckerman –  Oh Amanda, you broke my heart. I thought she was the sweetest, most kind hearted thing in the world for several weeks. I loved her to death. Then, one day, she turned psycho and never looked back. Amanda was my favorite character for a very long time during her season, but she ended up being absolutely nuts. Not only that, she became a bully. Nobody likes a bully….even on Big Brother.

Matt Hoffman –  Matt went where few guests have gone. Pretending a loved one is ill to gain votes is a whole new low for a human being, much less for Big Brother. I have never understood the whole bringing your family into it thing. The last thing you need is a ton of bad karma following you around. Matt should be ashamed of himself and the fact that he is not is very telling. This is not the type of television character I want to be watching again.

With the Big Brother 16 contestants that are on the show, they really don’t need to even bring in All Stars. The cast is solid and it appears there is already enough drama to go around. If you have a houseguest that I left out on the list, feel free to share in the comments below.