The Bold and the Beautiful Spoilers September 29: Wyatt Learns Hope Is Pregnant – Brooke Off Show, Deacon and Quinn Kiss! 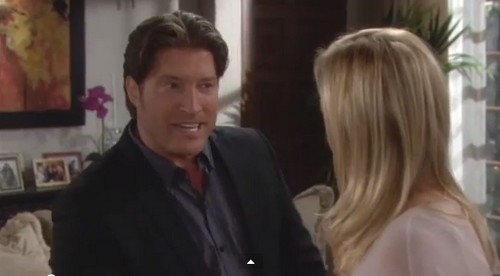 The Bold and the Beautiful spoilers for September 29 – October 3 tease a week of can’t-miss drama for B&B fans. Brooke Logan has found herself in a position that she is all too familiar with, torn between two men. Both Bill Spencer and Deacon Sharpe are waiting for Brooke to choose which one of them she will marry. And, in what may be the character Brooke’s smart decision…ever, she decides not to answer either of them and leave town to do some soul-searching.

Bold and the Beautiful spoilers teased a few weeks ago that Brooke’s portrayer Katherine Kelly Lang was exiting the CBS drama to head to Italy for a few months and compete in the European version of Dancing With The Stars, which is the driving force behind Brooke’s getaway. According to B&B spoilers, while Brooke is away fans can expect to see the feud between Deacon and Bill rally heat up, because they both blame the other for driving Brooke away.

Bold and the Beautiful spoilers for the week of September 29 reveal an unexpected kiss will take place between Quinn and Deacon! Apparently, Deacon is feeling a little blue over his failed proposal to Brooke, and well Quinn has been shunned by basically everyone. So, the two outcast roomies turn to each other for comfort, and things rally heat up. When Deacon Sharpe first returned to Bold and the Beautiful, fans swarmed to the internet pushing for Deacon and Quinn to hook up because of their undeniable chemistry, and it looks like they are getting exactly what they wished for.

Everyone is still buzzing about Hope’s pregnancy, and someone finally clues Wyatt in on Hope’s growing baby bump during the week of September 29. But spoilers reveal that someone leaks the good news to Quinn about her new grandchild and Hope is livid – she vows that Quinn will never be allowed to see her first child. So B&B fans, what do you think about Brooke’s exit, will you still tune in while Brooke is away?

Do you like the idea of Deacon and Quinn hooking up, or do you think he belongs with Brooke? Let us know what you think in the comments below and don’t forget to check CDL tomorrow for more BB spoilers.