The Bold and the Beautiful Spoilers March 24-28: Thorne Returns To Help Aly While She Joins Forces With Liam To Take Down Wyatt Fuller 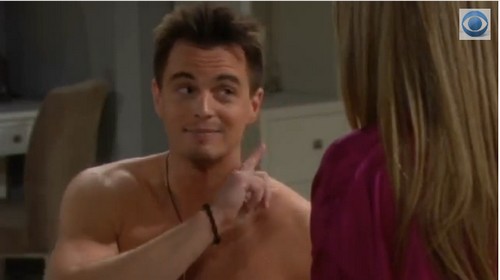 There is never an uneventful day on The Bold and the Beautiful, and next week the B&B cast will be dealing with two major events – Aly Forrester’s downward spiral and Ridge and Brooke’s unexpected break-up. According to The Bold and the Beautiful spoilers for the week of March 24th-28th, the Forrester family and their counterparts will be scrambling to try to clean up last week’s messes.

Recently on The Bold and the Beautiful Aly Forrester has been acting out of character, she is borderline obsessed with Hope and “her message” and bound and determined to destroy Hope’s boyfriend Wyatt and his mother. When she’s not occupied with that she’s talking to her dead Mom Darla’s ghost. This week, March 24th-28th on The Bold and the Beautiful, Aly’s grandfather Eric Forrester decides it is time to call in reinforcements, and has her Dad Thorne return to Los Angeles to deal with her.

Thorne is concerned when he learns that Aly has been seeing Darla’s ghost, and he tries to convince her to take it easy on Wyatt. That will be easier said than done though, because Wyatt is pushing the envelope and wants to change the Forrester line and make it bolder and sexier. It’s safe to assume Aly is not okay with that. Aly may not be fighting the Fullers on her own though, Liam has his own ulterior motives to take down Wyatt Fuller and he is happy to help Aly take on the Fuller family.

Meanwhile Ridge’s decision to drop Brooke like a bad habit and profess his love to her sister Katie, is causing some serious backlash. Rick is furious with Ridge for putting his mother through this again, and Ridge isn’t the only one in the hot seat next week on The Bold and the Beautiful. Donna sides with Brooke and has some choice words for her little sister Katie. And, to add to the drama, Bill Spencer is using this opportunity to try to win Brooke back.

As you can see The Bold and The Beautiful will be full of drama next week March 24th- 28th . In an interview with TV Guide a few weeks ago The Bold and the Beautiful producer Bradley Bell teased that Aly Forrester would have a new guy in her life very soon. How crazy would it be if Aly’s new love interest is Liam? Could you see Liam and Aly bonding over their mutual hate for Wyatt, and actually falling for each other? Share your thoughts and theories in the comment section below and don’t forget to check CDL tomorrow for more The Bold and the Beautiful spoilers.