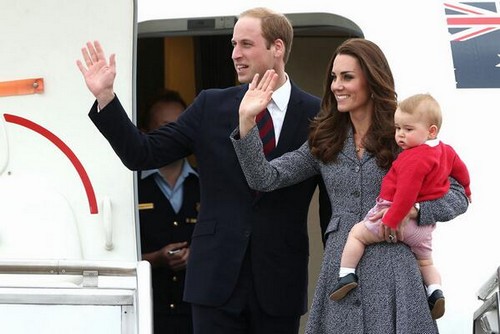 Kate Middleton, Prince William, and Prince George ended their whirlwind Australia and New Zealand tour, and they’ve been inundated with glowing press. Yes, most of it is because of Prince George and his adorable antics, but Will and Kate have also conducted themselves admirably, and it’s paying off. Their ratings in NZ and Australia are off the charts, and the royals’ popularity around the world has never been higher.

Everybody back home in England is obviously thrilled with the way the tour went – well, everybody except for Camilla Parker-Bowles. Surprise, surprise.

Camilla has been the black sheep of the family for as long as we can remember, never truly fitting in and lingering on the outsides, never replacing Princess Diana but always trying too hard. Her relationship with Prince Charles is obviously the only thing keeping her tethered to the royals, and because of Charles’ impending ascension to the throne, her status as the future wife to the King has been cemented.

But even then, will she ever be able to achieve the sort of public adoration that’s been following William, Kate, and George wherever they go lately? Camilla’s not ignorant – she knows the public’s not that fond of her, and they’ve never really warmed to her or Charles. But now that they’re taking over the Queen’s role, will Camilla try to revamp her PR image? According to our sources, she’s seething with jealousy over the way the public has been going gaga over the royals in New Zealand and Australia, but I doubt she can give birth to little chubby royal baby to create the same response. No, she’ll just have to wait and hope for the best, and try not to piss the public off. While we are sorry for Camilla’s loss of her brother, this in no way makes her a better or more likable person.