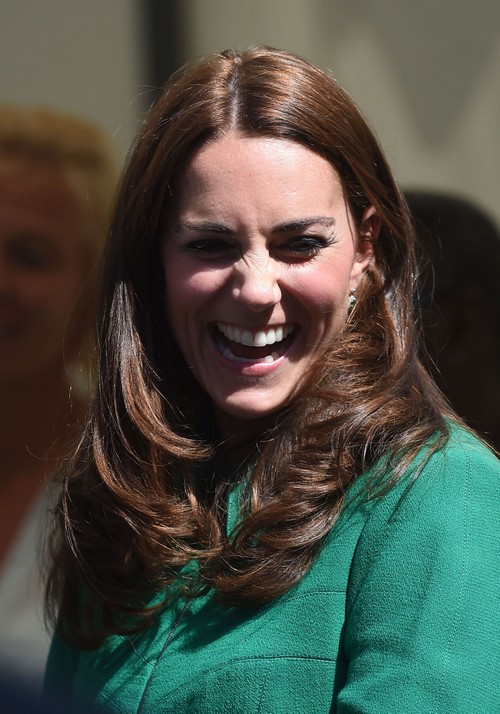 The Duchess of Cambridge is part of the neo-royal generation. The archaic and antiquated royal methods have evolved significantly since Princess Diana’s day and age. Royals developed into normal celebrities with normal lives due to Prince William’s marriage to Kate Middleton. The blue-bloods became average red-bloods and Camilla Parker-Bowles (bowels?) screamed at a painting – she thought it was a ghost.

Folksy Kate made this fact quite clear while watching a couple of Wimbledon matches last week. Tennis is stressful: umpires lie about love, ball boys face extinction with every serve and players yell louder than Jodie Foster at a Rosie O’ Donnell “Eyes Wide Shut” theme party. It’s a rather exciting and excruciating form of sport. No one is exempt from pulling “ah-my-gahd” faces when the balls start flying, including Kate Middleton.

The Duchess’ “ah-my-gahd” face got its Bruce Jenner on in some of the photos. Her expressions included: “My Weird Lip: The Nick Nolte Story”, “Eek! It’s Camilla The Vanilla Band”, “No way! Did he just…?”, “What a royal f**ck up!”, “Such pretty balls”, “The Queen will have your head!” “More like Game of Die! I HATE YOU!”, “Strawberries and death ma’am?”, and the seminal classic, “Camilla eats paper when she’s stressed!”

Everyone loves Kate, William and the adorable little George – they’re a family match made in rain and Helen Mirren movies. Princess Diana would have been proud of the blue-eyed boy who walked alongside her casket on that tragic day.

“No one is going to try to fill my mother’s shoes, what she did was fantastic. It’s about making your own future and your own destiny and Kate will do a very good job of that.” – Prince William