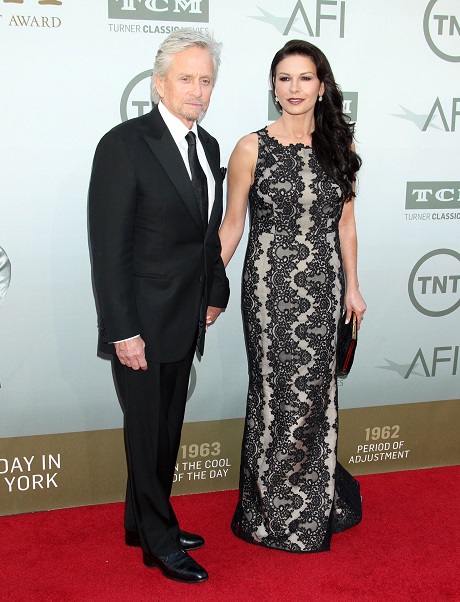 It has been more than three years since Michael Douglas received the news that he had truly beaten the odds by winning his battle with throat cancer, and it has been a year since he and Catherine Zeta-Jones confirmed that they were taking a breather. It’s one of those situations where I guess all is well that ends well, but boy did they go through hell to get here.

On Sunday, the couple got up hand-in-hand and spoke before 3,000 doctors at the International Federation of Head and Neck Oncologic Societies 5th World Congress opening ceremony in New York City on Sunday. They honestly discussed their journey through Michael’s cancer but those close to the couple realize that they fought through more than his disease.

Catherine has been diagnosed with a bipolar disorder that is made worse under extreme stress and the actress likes to self-medicate with a lot of booze. After the stress of putting her life on hold so that she could take care of Michael, she was left crushed when he rushed back to work once he felt stronger.

Things went downhill from there as the actor seemed to have pent up hostility of his own, clarifying that his cancer was likely caused by the HPV virus that he contracted during oral sex. After that public disclosure, Catherine was mortified and the couple only made it another month or so before confirming their split last summer.

Apparently, Michael eventually regretted his choices and started working over time to piece his family back together again. She seemed to be a reclusive hot mess until last Christmas when he finally wore her down. The two have certainly reconciled and both told those 3,000 doctors how happy they are to be together today but it must have taken a dump truck load of forgiveness to make it happen, don’t you think? Tell us in the comments below!