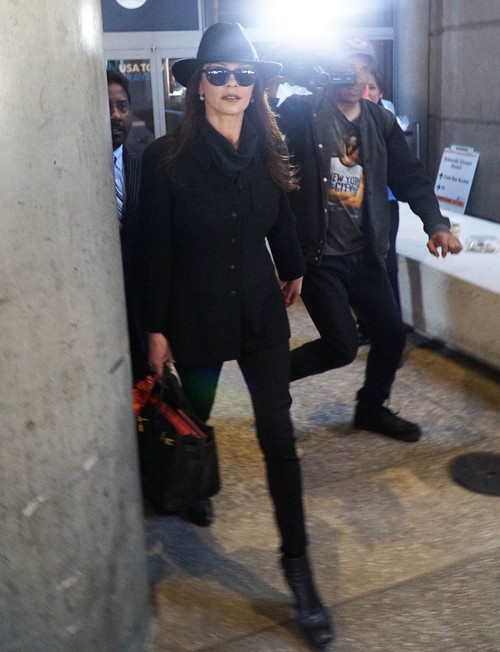 Catherine Zeta-Jones and Michael Douglas almost had a divorce last year, but they somehow managed to find their way back to each other. I still think that money and public image were the primary drivers in bringing them back together, but according to them, it’s because they’re still in ‘love’. Right, because being in love with a man who told the whole world that you gave him cancer from your STD is considered normal.

Then again, Catherine Zeta-Jones and Michael Douglas are anything but normal, and their relationship has never exactly been traditional, has it? Even barring the age difference, both of them seem to have fairly distinct viewpoints on careers and family lives, and that’s not even taking into account Catherine’s bipolar disorder. Plus, Michael Douglas has the tendency to act like a self-aggrandizing prick sometimes, and that can’t be easy on Catherine either.

If we had to hazard a guess, I’d say they’ve stuck with each other out of comfort and fear of the unknown, but how long can that really last? Especially since sources are revealing that Catherine and Michael recently sold their New York home for a massive $7.5 million. These same sources are alleging that both Catherine and Michael are slowly divvying up and getting rid of their assets, in preparation for an amicable divorce. They’re reportedly separate for Thanksgiving [although that hasn’t been verified], and if they’re not even spending the holidays together, what is their marriage really? Sham is too strong of a word, but I don’t think I would call it a loving relationship anymore, either.

What do you guys think? Are Michael Douglas and Catherine Zeta-Jones actually going to bite the bullet and get a divorce? Or will they somehow manage to save their relationship and marriage, or at least, continue faking their happiness? Let us know your thoughts in the comments below.

Catherine Zeta-Jones arriving on a flight at LAX airport in Los Angeles, California on November 26, 2014. It is being reported that Catherine and her husband Michael Douglas recently sold their New York home For a whopping $7.5 million by FameFlynet