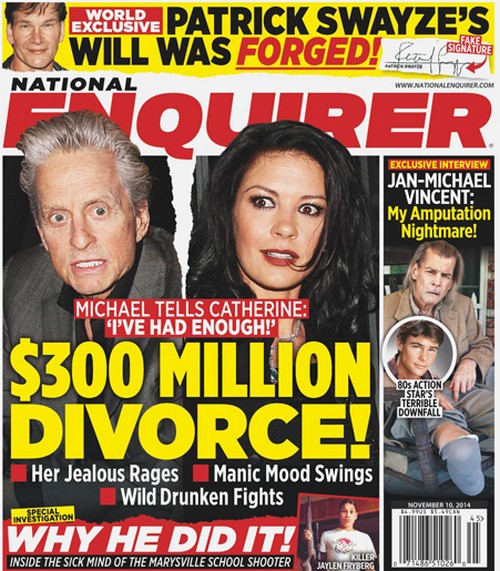 Michael Douglas and Catherine Zeta-Jones temporarily separated last year, but got back together after only a few months apart. But alas, it doesn’t look like their reconciliation is going to last, not if the rumors prove accurate. According to the latest cover issue of The National Enquirer, Michael Douglas and Catherine Zeta-Jones really will be getting a divorce this time, especially since Catherine has apparently ‘checked out’ of the marriage.

A source tells the Enquirer, “It takes two to make a marriage work, and Michael’s feeling is that Catherine has ‘checked out.’ So nothing is stopping him from throwing in the towel, too. The couple had a “big blow-up” before Michael headed off to work on new film ‘Ant Man’. He is preparing himself for the possibility of a $300 million divorce in 2015 if they can’t work out their differences.”

You know, I can’t say how accurate the Enquirer’s sources are, but I would not at ALL be surprised if this was true. First of all, I can’t even believe that Michael Douglas and Catherine Zeta-Jones got married, much less worked through their differences after separating the first time. Clearly, their bond was stronger than anyone suspected, as was Michael’s commitment to making his marriage work. The guy did fight his way back from Stage 4 tongue cancer, so he’s obviously not one for giving up. However, if his wife has mentally checked out of the marriage, then what’s really keeping him tethered to her?

There’s also a featured report in the Enquirer about how Patrick Swayze’s will was forged, but more details on that are still forthcoming.

What do you guys think? Is a Michael Douglas/Catherine Zeta-Jones divorce announcement coming soon? Or is this report making noise out of nothing? Let us know your thoughts in the comments below.