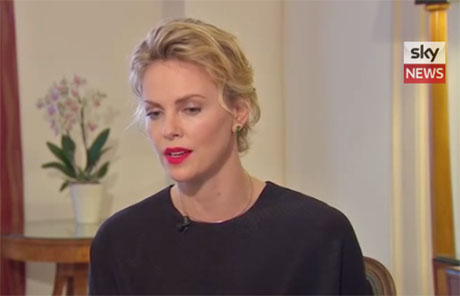 Charlize Theron isn’t the first celebrity to come out with harsh criticisms about the media and how they exploit celebs; however, she might be one of the first to equate press intrusion to being “raped.” A lot of people are a bit unsure what to make of her comments, so I suppose we’ll just let you hear what she has to say and then, please, feel free to leave your thoughts in the comments section below.

In an interview with Sky News on Friday, Charlize sat down with the interviewer and said, “I don’t do that (Google myself), so that’s my saving grace,” when asked about how the media shapes her life. “I think it’s when you start living in that world, and doing that, that you start, I guess, feeling raped.”

And the interviewer doesn’t let her get away with employing that strong word without offering some sort of explanation. The actress responds, “Well, when it comes to your son and your private life. Maybe that’s just me. Some people might relish in all that stuff, but there are certain things in my life that I think of as very sacred and I am very protective over them.”

“I don’t always win that war, but as long as I don’t have to see that stuff or read that stuff or hear that stuff then I can live with my head in a clear space, which is probably a lot healthier than living in that dark room.”

Take a look at the video below!