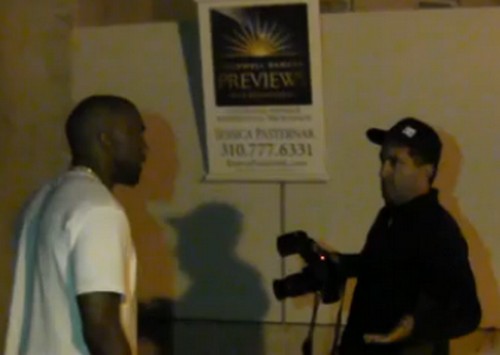 Kanye West went insane on the paparazzi once again, this time though you could tell he was seriously pissed off and not in the mood to be having photos taken, to be asked questions, or anything of that sort.

According to TMZ Kanye was at his house at around 4 AM and that’s when the paparazzi made their approach to him as he was going to get into his car and to apparently leave for the airport for their trip to Paris. All the paparazzi wanted to know about was the fight that Kanye is having with Jimmy Kimmel, for those who don’t know Jimmy Kimmel made a spoof of the BBC interview Kanye was in, but hired a kid to play Kanye; for some reason Kanye took it far too seriously and got angry, he began ranting on Twitter about it and more.

If you take a look at the video, you understand full and well why Kanye was pissed off and I honestly don’t blame him. It’s 4 AM you can clearly hear Kanye mention that, the photographers are standing on his driveway and asking questions; these paparazzi are trespassing on his property, of course someone wouldn’t want to talk to you at 4 AM it’s late and the trespassing part didn’t make it any better.

Kanye could have been more calm about the situation at hand, but the paparazzi look like they were trying to infuriate him; he didn’t want to answer questions or talk to them, yet they still opened their mouths. Plus Kim Kardashian was there and he naturally feels protective of his baby mama.

We’ve learned a valuable lesson today, don’t try to snap photos and ask Kanye questions at 4 AM and also don’t trespass on his property.