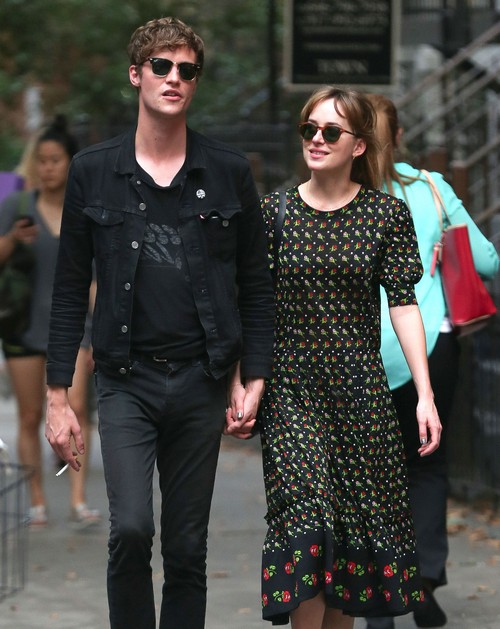 Dakota Johnson is preparing for the publicity onslaught of Fifty Shades of Grey, including getting herself a new mystery man/boyfriend/Mr. Grey – actually there is no mystery, the new boyfriend is Matthew Hitt, the frontman for Drowners, an American-Welsh indie rock band. While her co-star in the movie, Jamie Dornan, is married, Dakota is free to play the publicity game as she sees fit. And right now, that means cavorting around New York city with this dude, which she knows people are going to report considering the movie’s trailer release.

Now, one has to wonder how much of Dakota’s on-screen personality leaks over into her private life. Is she a ‘method’ actress? We don’t know enough about her to say one way or another, but we do know that she was handed this role for a reason. Does she carry the role over into her romantic life with this mystery dude, or is she maintaining a strict barrier between her role in the film and her relationship in real life?

I’m sure we’ll know more once the promotion starts in earnest, but for now, all we had was a quick snippet from the trailer. We hear a few lines of dialogue between Christian and Anastasia in this snippet, followed by a sensual sigh from Beyonce. Clearly, Beyonce is involved in a musical capacity with the film, so in addition to Dakota’s boyfriend PR, we’ll get the endless Beyonce/Jay-Z coverage adding to the cycle. The Universal promotional team is probably counting their blessings, since all of their work is being done for them right now courtesy of the ongoing Bey-Jay divorce rumors.

What do you guys think of Dakota’s mystery man? And are you excited for the release of the trailer? Let us know your thoughts in the comments below.